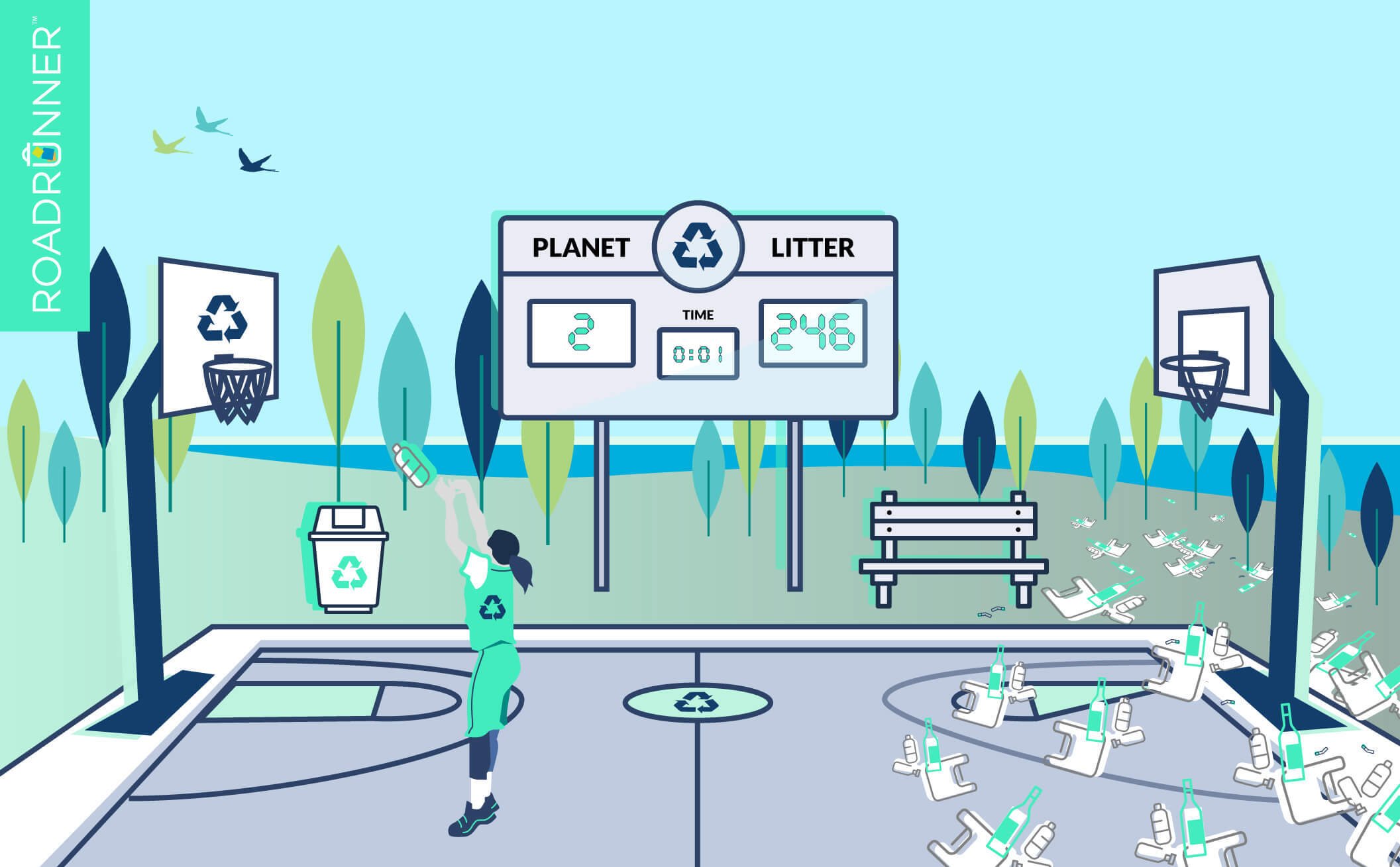 Behind every roadside potato chip bag, bobbing beer can in the park pond, and bottle caps where there should be seashells, a choice was made: someone left it there.

Litter happens in an instant. Something that was once a container, a wrapper, or a can only becomes environmental waste once it leaves a human’s hand. And the truth hurts to know there was a much better decision that could have been made—more often than not, it could have been recycled.

As we mark September’s National Cleanup Day and beyond, we’re providing a collection of shocking facts about America’s litter problem that will inspire you to always choose to recycle (as well as some effective ways your business can clean up its community).

The Facts About Litter in the U.S.

1. U.S. roadways accumulate over 51 billion pieces of litter per year¹

2. There are an estimated 6,729 pieces of litter per roadway mile.¹

7. The presence of litter in your neighborhood or community lowers property values by 7%.¹

8. Packaging litter makes up 46% of litter measuring 4 inches or greater.¹

10. 394.7 million fast-food cups and 423 million other fast-food packaging items were identified in the same survey.²

12. An average American litters or improperly disposes of 100 plastic bottles per year.⁷

13. 207 million items of PPE masks and gloves were found across America’s roads and waterways in 2020.²

15. In a single-day global cleanup initiative in 2018, 1.9 million grocery bags were collected.⁵

16. Between 10–12 million metric tons of plastic waste enters the ocean each year.⁶

18. One million marine animals are killed by plastic marine litter every year.³

19. Both direct and indirect costs from plastic marine litter costs the world $2.5 trillion per year.⁴

How to Take Action Against Litter

Considering 75% of the United States’ overall waste stream is recyclable (says the EPA), the same ratio can rationally be applied to how much the nation litters.

But unlike our processed waste stream, where 32.1% is actually recycled, the same can’t be said for environmental waste. Once it’s out there, it’s difficult to retrieve.

That’s why, personally or for your business, an efficient and comprehensive recycling program should always be Plan A. For any commercial operation, aligning with a responsible recycling partner ensures that your company never contributes to mismanaged environmental waste.

RoadRunner Recycling, a Pittsburgh-based waste & recycling management company operating in 20 major U.S. markets, recognizes the need for efficiency to guarantee recyclables reach their end markets (and not the landfill, roadway, or beach). Leveraging a powerful urban logistics engine and a network of third-party haulers called FleetHaul, 99.9% of what our partners choose to recycle is actually recycled.

It’s with unparalleled dedication to helping others recycle more and a desire to better the environment that not only drives the company forward but also carries through to the determination of its employees in getting personally involved.

Even with the most stringent and proactive recycling policies in place, litter is inevitable. That’s where the concept of recovery comes in. As Plan B, organized cleanup efforts are crucial for healthy communities.

Mobilizing this idea, National CleanUp Day encourages businesses and community members to pick up (and recycle) litter strewn across parks, roadways, and near waterways. Annually held on the third Saturday in September, RoadRunner’s employees have continually shown passion and accountability through avid participation.

RoadRunner takes part in a community cleanup in 2019.

As the COVID-19 pandemic has made gathering more difficult, National Cleanup Day has opened the completion of this civic duty to the entire month of September, as well as plenty of options for going to a cleanup solo.

However, for companies who wish to make an impact in their community as a team, there are a few keys to motivating a strong response from employees.

1. Align the Activity with Your Company Goals

Showing responsibility and respect for the communities your employees live in should be a goal for any company. Announce your intentions for this cleanup to the company and commit to the cause by sharing a few of the surprising facts from above.

Set a firm date for the cleanup. Set a meeting point and time. Start a list for attendees. And to demonstrate your ongoing commitment, you could announce National Cleanup Day will be a yearly tradition for your company. If you don’t want to start your own, you can always join another group’s cleanup, too.

Gathering outside of the work or office setting is great for camaraderie. While the ultimate reward is a cleaner community and sense of pride for helping the environment, providing your employees with a coffee (in a recyclable cup) or a pre- or post-activity snack is sometimes all that’s needed to get your workforce out there in numbers!


Sources for “The Facts About Litter in the U.S.”:

4. The Guardian. “Marine plastic pollution costs the world up to $2.5tn a year, researchers find.”

6. National Geographic. “Plastic trash flowing into the seas will nearly triple by 2040 without drastic action.”