Last weekend spring cleaning was underway in Washington D.C. thanks to 1481 volunteers for the Alice Ferguson Foundation’s 27th Annual Potomac River Watershed Cleanup. Among the volunteers were RoadRunner Recycling employees who, even in their free time, exhibit their passion for trash – or proper management of trash more accurately.

The 174,575 pounds of trash collected that day along the Potomac – at 58 different sites in Maryland, Virginia, West Virginia, Pennsylvania and Washington, D.C. - is part of a larger story about disposable packaging and goods.

Just in this one day clean up event, an estimated 188,250 beverage containers were picked up, along with 6,307 plastic bags and a variety of other disposable items that we often think of as “recyclable”. And, if everything had gone as intended by the manufacturers of those products, most of those items could have been recycled.

But instead, they were dropped on city streets, or they blew out of trash bins on windy days, or they got washed down the hill during a storm. People may mistakenly think that the plastic containers collected at water’s edge were left by kids or homeless campers. But, in reality the bulk of materials started in our neighborhoods. If people don’t stop to pick up the chip bag or the bottle caps along the road, they make their way to the river and, from there, make their way to the North Atlantic Gyre or one of the other garbage patches that are like massive floating landfills in every ocean on the planet. 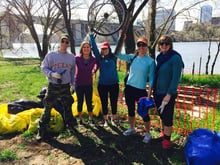 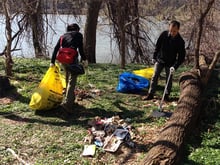 As we celebrate beautiful spring days, it’s a good reminder that reduce and reuse were intended to come before ‘recycle’ in the 3 R’s lessons. And, that we all can help by participating in clean up events. Or, simply by bending down and pick up trash blowing around our city streets before it ever makes it to the watershed.

Here are some upcoming events to check out: