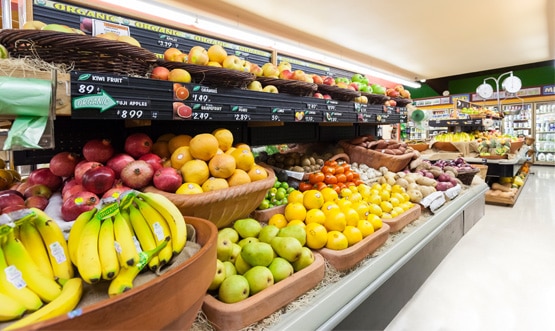 Every year, the United States throws out nearly 133 billion pounds of food, and supermarkets throw out around 10% of it. When businesses in the grocery industry don't have efficient recycling programs in place, their food waste becomes heavy and expensive to throw away as trash and can contaminate other materials when they're mixed together. In our post, we will uncover why the grocery industry sends significant amounts of recyclable and compostable materials to landfill, and identify how smarter collection systems can ensure their materials are recycled efficiently and correctly.

Why Are Grocery Stores Producing So Much Waste?

A lot of food gets wasted due to overstocking. The Washington Post explains, "Stores would rather overstock their shelves and throw out the remainder than look empty." Also, customers avoid buying produce that is shaped strange, or packaging that is slightly damaged, even though the appearance has nothing to do with the value of the product. All of the "ugly" foods, and probably those around it, are thrown out. A lot of products are also tossed because of an industry-wide confusion about sell-by dates or best-by dates which leads to perfectly good produce being tossed before it goes bad.

Although the majority of supermarket waste consists of food, nearly all of the products are packaged in cardboard and plastic. The Association of Postconsumer Plastic Recycles (APR) estimates that grocery stores generate 354 million pounds of plastic annually. However, very little plastic is actually recycled in the United States. The EPA reports, "Together, food and packaging/containers account for almost 45% of the materials landfilled in the United States, and some of these discarded materials are food-related packaging and containers."

How Can Supermarkets Create Less Waste?

Even through grocery stores and supermarkets produce high volumes of waste, their waste doesn't need to go to landfill. A significant amount of grocery store waste can be recycled or composted, making them big candidates for stream-lined recovery programs. 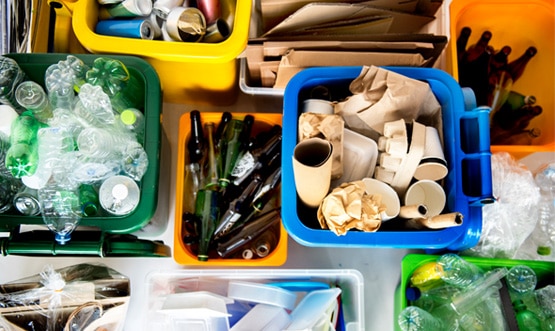 Industries that create diverse and high volumes of waste can capture the most value from their materials when they are separated by stream - cardboard, commingled (glass, aluminum, plastic), mixed paper, and compost - so the materials remain clean. When packaging materials are mixed with – and contaminated by – organics and expired food waste, it reduces the possibility of recycling for either type of material. The "clean-stream" recycling method is proven to help avoid contamination so as much waste can be diverted from landfill as possible.

Many grocery stores and supermarkets are reducing and recycling their materials as well as implementing sustainable practices in an effort to minimize their impact. Whole Foods has begun composting their spoiled produce and biodegradable waste and were able to reduce their landfill waste by 75%. They have also begun utilizing reusable green plates and salad boxes made from 100% compostable material.

The EPA claims that as many as one trillion plastic bags are used but less than 5% are recycled around the world. Kroger, who orders around 6 billion plastic shopping bags a year, has begun eliminating the plastic bags at many of their locations and plans to eliminate them in all their stores by 2025.

Supermarkets like Sam's Club and Costco allow customers to buy in bulk and avoid all of that extra plastic and cardboard packaging. An article from Progressive Grocer analyzed a study evaluating the environmental and economic benefits of buying in bulk, and they found that grocery stores who offer bulk products save too. The article states, "The findings show that a food company choosing to market bulk foods versus packaged foods can save an average of 54 percent on material and delivery costs since more pallets of bulk food can be packed onto delivery trucks." Those savings are pretty remarkable!

Many stores like Walmart have worked on standardizing their expiration labels to avoid confusion around "sell-by" or "best if used by" dates. A uniformed date label system can save Americans up to $29 billion annually!

Even through grocery stores and supermarkets produce a lot of waste, they can implement smarter collection systems and practices to ensure as much of their waste is diverted from landfill as possible. Through stream-lining their recycling, RoadRunner Recycling was able to help supermarkets save an average of 18% on their monthly waste costs. If you have any questions or want to learn how to start recycling with RoadRunner, get it touch with us here or leave us a comment below!