Why is Recycling “Styrofoam” an Environmental Problem? 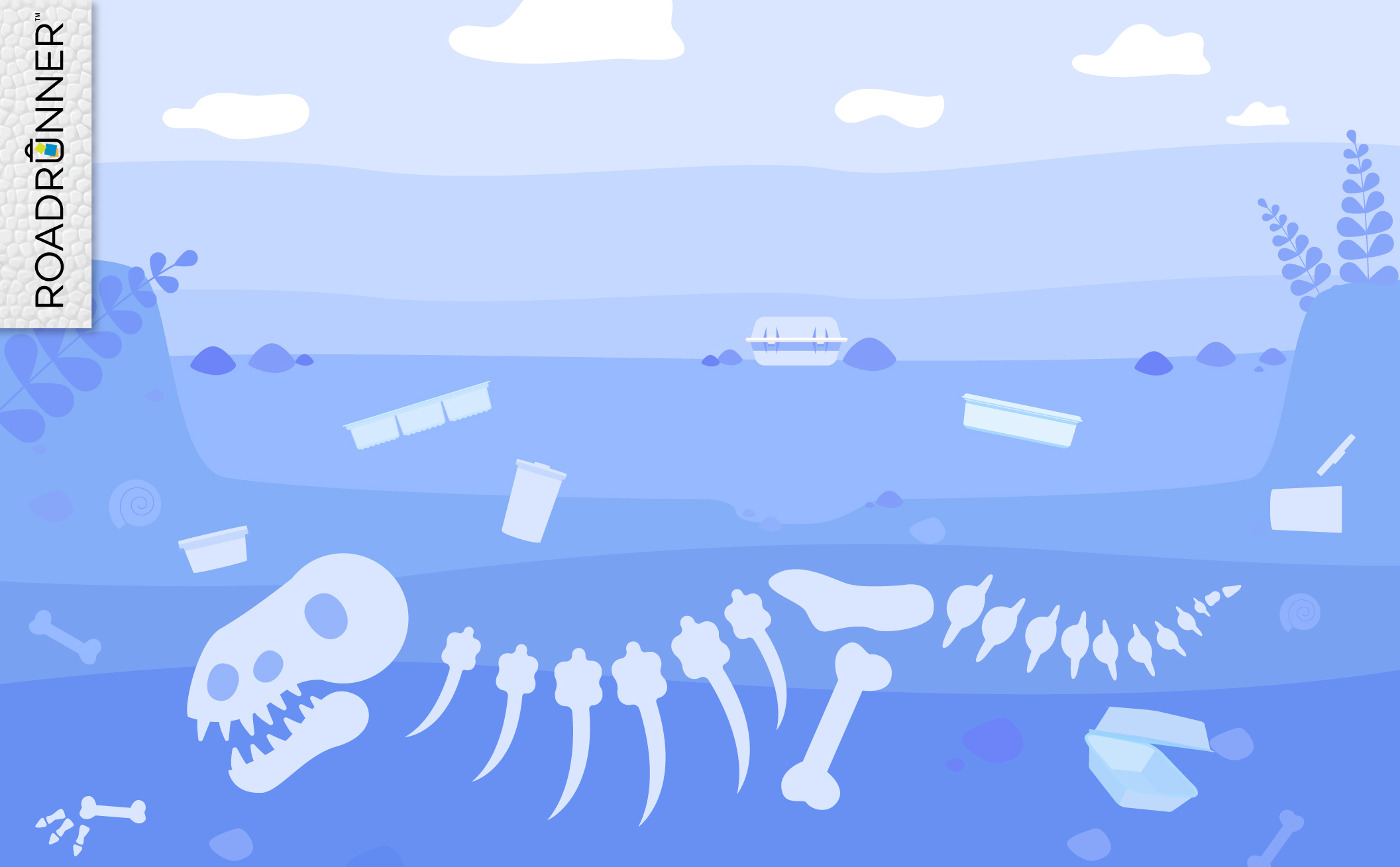 This post was originally published in April 2020 by Shelby Bell and has been updated.

“Styrofoam.” “Polystyrene.” “EPS.” No matter what you call it, it’s likely we’re all talking about the same plastic material. It forms the cups we keep next to the office coffee pot, braces our new printers in the box, and arrives in clamshell form whenever we order takeout or when our eyes are bigger than our stomachs.

Among its virtues, it’s lightweight, durable, and inexpensive. For years, “Styrofoam” has melted into whatever form we desired and has been perpetuated by countless use cases throughout the consumer economy.

But its single-use nature presents a dark side: It will crumble and scatter in the wind; it will take up an inordinate amount of space in landfill; and it will still be there long after your great-grandchildren have great-great-grandchildren. That’s because there are very few recyclers that can process it, and the majority of haulers will instruct you to trash it.

While reduction efforts and state mandates promote changes, if you realize how far polystyrene has expanded into our society, then you’ll understand it’s no easy problem to shrink.

Polystyrene is a synthetic polymer that can take multiple chemical forms. And while most of the world calls it by its name, in the U.S., we’re more familiar with the term “Styrofoam” to describe any size, shape, or makeup of this puffed-up plastic. But that would be a mistake.

Styrofoam is a trademarked product of The Dow Chemical Company often used as building insulation. However, Americans have generalized the name to the same extent that every tissue is a Kleenex and every adhesive bandage is a Band-Aid.

That means what you likely call "Styrofoam" is actually expanded polystyrene (EPS), a plastic material frequently used to create a variety of consumer products. Polystyrene is preferred in the packaging and food industries because it's lightweight (95% air!), has insulation properties that keep food and drinks hot or cold, and is durable enough to protect items during shipping. In practice, EPS is most often used for coffee cups, bulk packaging, carry-out “clamshell” containers, and egg cartons.

While polystyrene is known to be cost-effective, it's unfortunately very difficult and costly to recycle (despite being stamped with the #6 “chasing arrows” symbol).

Most recycling facilities are unable to process EPS because, unlike other plastics, it's challenging to get back in its base form. Few MRFs and other recycling facilities have invested in the compacting/densifying equipment required to reform foam blocks, and the entire process is time-consuming and expensive. Thus, the majority of commercial and curbside waste management companies require its disposal in the trash can.

Cost isn’t the only issue, however. Polystyrene’s brittle form means it easily breaks into tiny pieces and disperses—a considerable problem not only when Americans “wishcycle” it but also when the wind blows, waves crash, or landfill-owned bulldozers raze.

THE ENVIRONMENTAL IMPACTS OF POLYSTYRENE

Every year, the world produces over 15 million metric tons of polystyrene. Given that the standard takeout container weighs under 14 ounces, that’s an unthinkable amount of polystyrene to manage.

According to the EPA, in 2018, the U.S. generated 80,000 tons of polystyrene waste in the form of containers, while less than 5,000 tons of it was actually recycled. For Other Plastic Packaging—a category where the EPA counts “coatings, closures, lids, caps, clamshells, egg cartons, produce baskets, trays, shapes, loose fill, etc.”—those numbers reach 330,000 tons and 20,000 tons, respectively.

Underscoring it all, when everything is weighed and tallied by resin, the recycling rate for polystyrene (as of 2018) was just 0.9%.

That leaves three possible outlets for discarded polystyrene: burned, landfilled, or littered in the environment. And because polystyrene is chemically stable, non-biodegradable, and neither bacteria or microorganisms feed on it, it’s an environmental catastrophe that lingers.

As you may know, of the nine billion tons of total plastic produced since 1950, only around 9% has been recycled. For polystyrene in particular, the recycling problems are a little more complex.

The airy, expanded material creates volume and bulk, filling landfills faster. And under the right conditions, like buried in an oxygen-deprived dump, polystyrene will take between 500 years and forever to break down. It’s startling to think the cheap cooler that you used for five hours at a concert could still be around in half a millennium!

Outside of the landfill, the situation isn’t much better. Once littered or dumped, the lightweight material is easily carried into waterways and oceans by the wind—contributing a massive amount of material to The Great Pacific Garbage Patch, a flotilla of garbage twice the size of Texas floating around in the northern Pacific Ocean between Hawaii and California.

Environmental groups have advocated for polystyrene or “Styrofoam” bans since the 1980s, when Berkeley, California was the first city to enforce a sweeping ban on polystyrene in 1988. Fast-forward to today, where the agenda on polystyrene containers has evolved rapidly.

Maine became the first state to pass a ban on EPS, prohibiting restaurants, caterers, coffee shops, and grocery stores from using to-go foam containers. After an exemption period for the COVID-19 pandemic, the law is now in effect. Legislation against polystyrene foam packaging for meat, poultry, fish, seafood, and eggs was passed in June of 2021 and will take effect in July 2025.

Maryland followed shortly after in 2019, passing legislation that bans all polystyrene products from food service. The law is currently being enforced. However, meat and seafood packing industries are exempted from the law.

Vermont’s law, signed at nearly the same time in 2019, is very similar to Maryland’s, banning all food service uses save the meat packing industry. Yet, the ban goes a step further, outlawing plastic bags, plastic straws, and plastic stirrers used by grocery stores, restaurants, and cafes.

Among bills set to take effect in the coming years… New York’s, which targets the food service industry, schools, hospitals, and more (as well as a moratorium on “packing peanuts”) becomes law in January 2022. Virginia passed what has become “the standard,” agreeing to prohibit food service from using EPS containers—it’ll take effect July 2023 for large businesses and July 2025 for small businesses. Colorado’s law, signed July 2021, will prevent both restaurants and retailers from using EPS containers and plastic bags.

Following Berkeley’s lead, California cities like San Francisco, Palm Springs, Sonoma, and a long line of others passed city ordinances to remove polystyrene from its restaurants. Other cities who’ve outlawed the material in food and retail include Seattle, Portland, Washington D.C., and Portsmouth, New Hampshire, among many more.

Where there has been contention, city governments have moved to ban polystyrene in specific areas or zones instead, such as Atlanta’s Hartsfield-Jackson International Airport and all of Tampa’s public property.

HOW YOUR BUSINESS CAN REDUCE & RECYCLE POLYSTYRENE

Need help navigating the complicated life cycle of polystyrene? Your business’s sole option isn’t the trash compactor; there are responsible, more sustainable avenues to managing all that foam.

The most effective way to reduce “Styrofoam” and polystyrene is by refusing it altogether. Talk to your procurement team about refusing to buy foam products. Also, a small but important early step: Tackle your workplace’s kitchen, breakroom, or coffee bar—replace all EPS cups, plates, bowls, and to-go containers with products manufactured from recycled products, packaging containing biodegradable or compostable products, and those that your community can easily recycle or reuse.

Consistently emphasize the importance of reducing polystyrene in the business, not only for the environment but also to reduce the volume of your business’s waste. With positive momentum, you can advocate for becoming a polystyrene-free workplace.

Work with manufacturers who use eco-friendly packaging instead of expanded or extruded polystyrene. You may discover a particular supplier is better-aligned with your business's sustainability goals. Or perhaps you can encourage your current suppliers to use less packaging. Making smarter purchasing decisions and setting standards early in the process makes it easier for organizations to take control of their own practices.

For creative, eco-friendly solutions in the food industry, explore brands like Notpla and other manufacturers. For inspiration on eliminating plastic packaging throughout an entire supply chain, look to India’s Flipkart.

If you can't use any of the options above, don't resort to automatically placing polystyrene (or "Styrofoam") in the garbage. While recycling is limited for EPS, there are recycling markets for it. Cities and municipalities may have a designated drop-off location or may host a regular collection event. Earth911 Recycling Search can also help you find #6 plastic recycling in your area.

Floundering in foam? RoadRunner’s FleetHaul service has a strong track record of helping commercial businesses find outlets for hard-to-recycle items. While we won’t personally shrink your polystyrene, we can do something about reducing bulky fees on your waste bill.