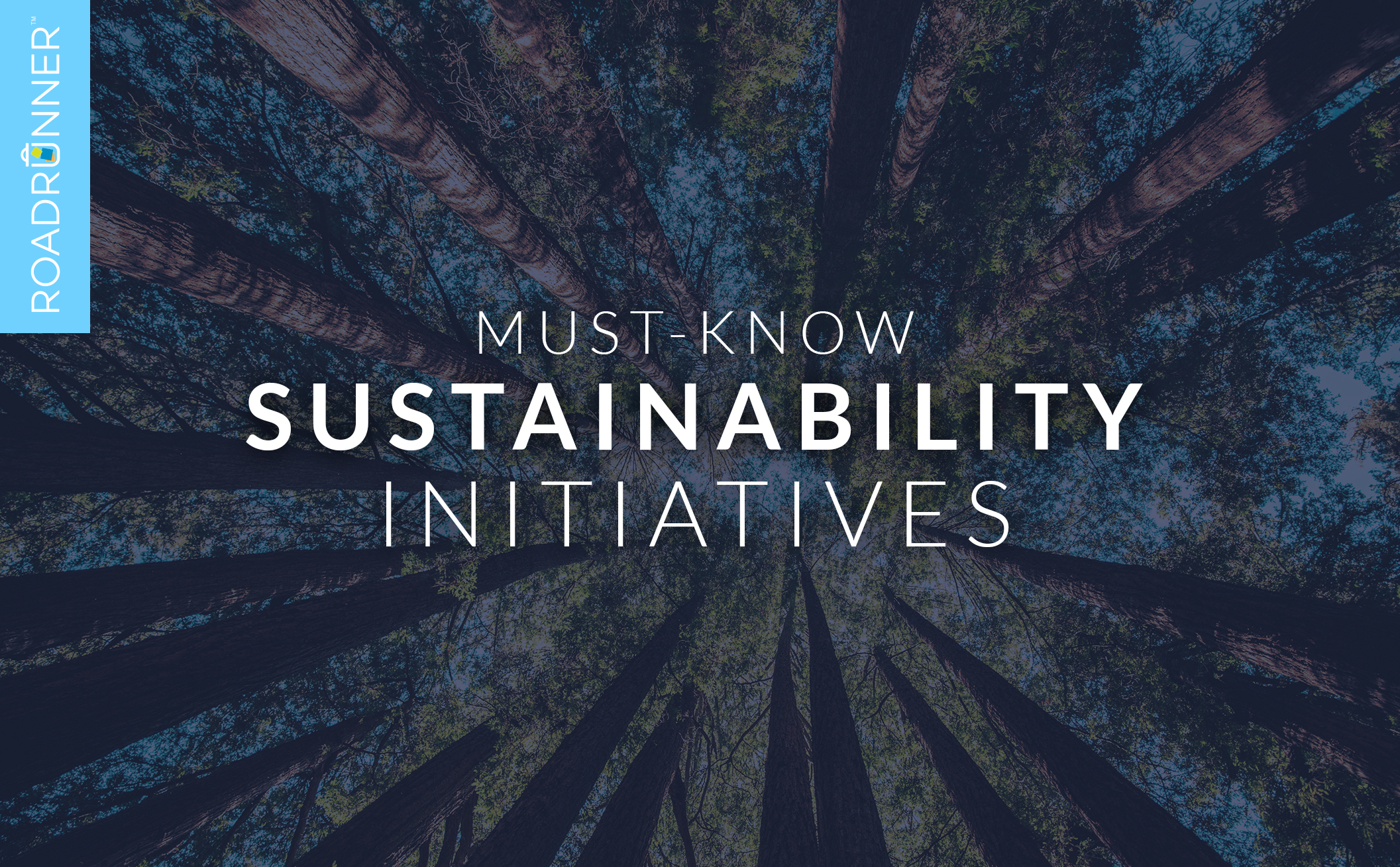 Sustainability is an undeniable cause, a ubiquitous movement, and now, an expected undertaking for businesses. If your company doesn’t practice it, it risks losing both perception and profits.

The broad, admirable movements of environmentalism and sustainability, however, are veering dangerously toward becoming buzzwords in the business world. And that’s because of greenwashing: the act of convincing the public (sometimes deceptively) that one’s products and policies are environmentally friendly… when, technically, they’re not.

As a waste and recycling management operator at the intersection of environmentalism and sustainability, RoadRunner’s position and experience allow us some perspective. While corporate sustainability announcements occur every day, this year, there have been some major developments in legislation, corporate social responsibility (CSR), and in society as a whole that we think are legitimate and meaningful—and may even inspire your business to create a sustainability story of its own.

These are the 10 stories you need to follow this year.

MSW (municipal solid waste) landfills are the 3rd-largest source of human-related methane emissions. Now, after a court ruling, the EPA says 1,590 U.S. landfill operators (the overwhelming majority) must comply with mitigating the gas.

That vital step toward reducing America’s contribution to ballooning greenhouse gas emissions could very well cost your business big-time if you’re not prepared. It starts with something called a “tipping fee.” Landfill tipping fees (the cost for haulers to deposit your business's material) are already up, averaging a 2.8% increase year-over-year since 2016.

With the new legislation, landfill operators will be required to install methane-capturing and mitigation processes. Operational costs like these are routinely passed to haulers by raising tipping fees. Haulers, meanwhile, pass along operational costs to their customers through APIs (annual price increases), which often levied as high as 20% year-over-year.

The EPA mandate will take effect over the next 30 months. To be better prepared, read more about how RoadRunner caps APIs here.

“Disposable” Blue Face Masks Might Be Turned into Roads

Those blue face masks we’ve used by the trillions? They have plastic in them, which makes them incredibly difficult to recycle. So, what do we do with the 4.3 billion in circulation each day when the pandemic is over? Sustainable infrastructure.

As it turns out, we can build roads with them. But not just any roads. Scientists from RMIT University in Melbourne, Australia suggest the polypropylene from the masks can fortify the roads to be more durable and, the big selling point, cost 30% less to construct.

A two-lane, 0.62-mile stretch of this plastic-laced pavement will use 3 million masks, keeping 93 tons of wearable polypropylene out of the landfill. Instead of filling up the dump or littering the ocean, the legacy of the face masks from this black mark on history can live on as blacktop.

Diageo, the largest distiller in the world, entered into a consortium with beverage giant PepsiCo to develop a 100% plastic-free bottle made from sustainably sourced wood pulp. The food-safe paper bottle will be fully recyclable in standard waste streams and will debut in Johnnie Walker scotch whisky and non-alcoholic PepsiCo beverages in 2021.

Meanwhile, brands are queuing up to work with Georgia-based biopolymer manufacturer Danimer Scientific.

One such partnership, a deal with Mars Wrigley—maker of Skittles and other candies—has enabled a product strategy that assumes you'll litter a wrapper before recycling it. The duo is developing a fully biodegradable wrapper for Mars Wrigley’s Skittles candies. Sourced from canola and soy seeds, the wrapper will break down in compost, soil, and even the ocean without leaving a footprint. It's the latest in the snack brand's effort to have all packaging be reusable, recyclable, or compostable by 2025.

American spirits company Bacardi, for its part, has taken a pledge to become completely plastic-free by 2030. In partnership with Danimer, the distiller unveiled a 100% biodegradable plastic bottle made from plant-based oils. It'll decompose within 18 months in compost, soil, or water, and it won't leave behind any harmful microplastics.

Bacardi says the switch, beginning in 2023, will eliminate 80M plastic bottles from its production.

The Sneaker Industry Wants to Be More Sustainable

Understanding that producing the average sneaker creates a 30lb carbon footprint, global sporting retailer adidas and direct-to-consumer footwear brand Allbirds wanted to create a breath of fresh air, aiming for the "most sustainable shoe ever."

The result? A sleek and stylish collab with a 2.94lb carbon footprint—only made possible through cooperation. A limited run of 10,000 Futurecraft.Footprint shoes will be released this December, with future iterations likely following its framework.

New Balance, on the other hand, is looking to reach its sustainability goals through the “ugliest shoe ever.” A symbol of its “Responsible Leadership” strategy, the footwear giant has created a version of its popular 998 shoe with a mix of scraps from the production floor, polyester, and some stitching.

As its two largest drivers of climate impact, NB has pledged to use 50% recycled polyester and 100% eco-friendly leather by 2025 across all footwear, as well as sending zero waste to landfill from its factories by the same year.

In 2020, Chipotle Mexican Grill's revised its environmental, social, & governance (ESG) goals, outlining one of the most aggressive pursuits of sustainability in the industry.

Along with tying executive compensation to reaching eco-milestones and pledging to publish its Scope 3 emissions—the collective emissions of its entire supply chain—it released one of the most comprehensive sustainability reports in commercial business.

Among its accomplishments, the quick-service restaurant achieved a 51% diversion rate through recycling, composting, and waste-to-energy programs; it pursued alternative waste diversion methods, including joint Gloves to Bags program with Revolution Bag (turning used plastic gloves into trash bags); and unveiled its Avocado Dye Line, an open-looped collection of apparel dyed with its upcycled avocado pits.

Chipotle’s newest goal is to reduce overall waste production an additional 5% by 2025.

"Infinitely recyclable plastic." Those three words have never been used in the same sentence before now.

Developed by Berkeley Lab, polydiketoenamine (or PDK) is a new type of polymer that can be used for everything from packaging to car parts. The breakthrough material can be recycled completely, forever reusable without ever degrading in quality.

This could very well be a circular economy's missing link. A commercial launch of the material is forthcoming.

There is no such thing as an IKEA antique. That’s because the model the Swedish department store pioneered—affordability over durability—means your couch or desk will more often than not find the curb before it finds a new home.

Selling a "Billy" bookcase every five seconds around the world, the IKEA lifestyle perpetuates throwaway culture, with massive amounts of furniture finding its way to the landfill each year.

Knowing this, IKEA introduced a sustainability program where they buy back your gently used store-brand furniture for as much as half the original buying price.

However, if this program doesn't find as much popularity as their Swedish meatballs, this program will be as temporary as the Poäng chair in your living room.

The Break Free from Plastic Pollution Act was reintroduced to Congress in March 2021. A progressive recycling and extended producer responsibility bill, it would have a significant impact on both the waste industry and manufacturing if passed.

Among its starkest mandates, single-use plastic bags, expanded polystyrene containers (plus “packing peanuts”), and non-compostable produce stickers would be banned by 2023.

From a manufacturing perspective, a three-year freeze on permits for new plastics production facilities would go into effect. For those in operation, the EPA will create standardized recycling labels for products, while the numbered “chasing arrows” symbols will be barred from any products not easily recyclable.

For consumer goods companies, plastic beverage containers will be required to meet a minimum post-consumer recycled (PCR) content threshold: 25% by 2025; 80% by 2040.

And packaging producers will have to take responsibility for collecting and recycling materials; these companies will be required to join producer responsibility organizations that collectively target 90% reuse or recycling of paper and beverage containers, and 80% of most other covered products by 2032.

Recognizing that the food industry is responsible for 26% of worldwide greenhouse gas emissions, CPG giant Unilever is taking action in its food biz. Initially planned for 2030, Unilever bumped up its commitment to cut factory-to-shelf food waste in half by five years.

From upcycling ice cream (re-melting ice cream lost in production into its German ice cream product Cremissimo) to encouraging consumers to whip up something with Hellmann's mayo before it goes bad, the company is weaving extended producer responsibility and aggressive sustainability targets into a successful business model.

The current U.S. system, single-stream recycling, was widely adopted in the late '90s and was supposed to make it easier for consumers and businesses to recycle. Yet, 25% of what we attempt is too contaminated to even reuse. Even more telling, the national recycling rate over that time has never been greater than 34.9% (2016).

For us to hit that goal, there has to be a new way forward. It exists, too. RoadRunner is pioneering clean-stream recycling, and for businesses, it means not only boosting recycling rates but also considerable cost savings.

It makes hitting that 50% mark seem like much less of a moonshot.

For more news, analysis, and sustainable thought leadership through a business lens, follow us on LinkedIn. We share new commentary every day and would love to hear your thoughts.