The History and Future of The Great Pacific Garbage Patch 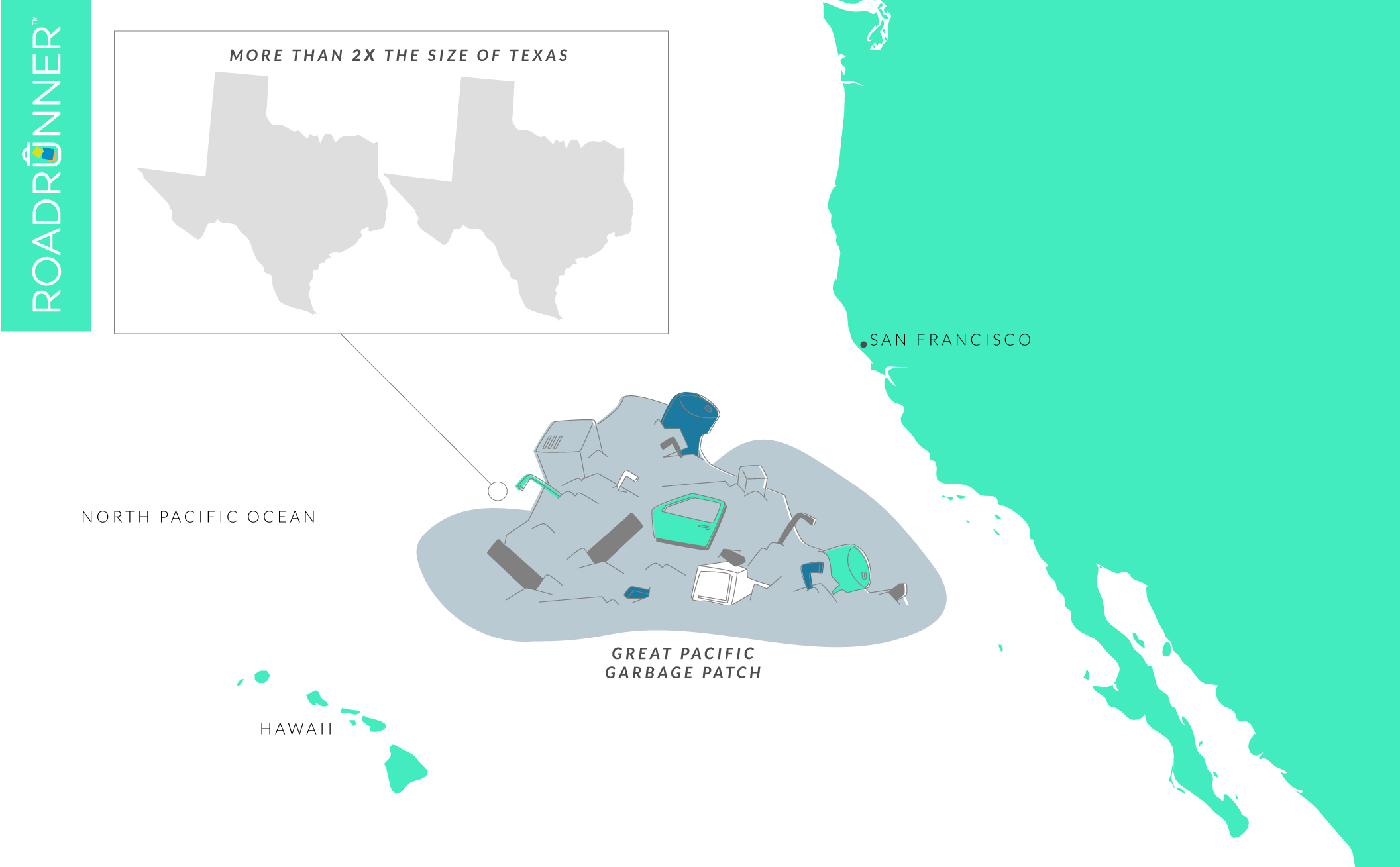 In 1997, racing boat captain Charles Moore made an unfortunate discovery in one of the most remote parts of the world. Returning from a trans-Pacific race, he and his crew were met by an undulating trash heap, with plastic junk bobbing in the ocean for as far as the eye could see.

He called it the Great Pacific Garbage Patch, and this swirling unnatural disaster looming off the coast of California may be a greater threat than any hurricane of our time.

The flotilla of wayward fishing gear, plastic waste, and other manmade marine debris is choking out ocean life from the seafloor to the surface. A result of improper management, dumping, and littering by the world’s population, it’s estimated that between 1.1 and 3.6 TRILLION pieces of plastic float in the area.

Today, as the (hotly contested) estimated surface area swells to 1.6 million kilometers—an area that will soon be larger than the state of Alaska—the tough questions are finally being asked.

How did this happen? What can we do? And how long will it take this storm of our own garbage to strike the beaches of California?

The World of Ocean Garbage Patches

Charles Moore might have brought the Great Pacific Garbage Patch into the public eye, but it’s important to understand that because our oceans are vast, the rotation of the Earth is steady, and only 9% of all plastic ever made has been recycled—this isn’t the only “Great” garbage patch.

There are five major marine debris concentrations in the world, and they exist because of the natural effect of ocean gyres and manmade plastic pollution.

Ocean gyres are large systems of circulating ocean currents caused by wind, tides, and the rotational Coriolis effect of the Earth. Major surface currents are like giant conveyor belts for the planet’s seawater, and with land acting as its borders, the motion goes circular.

Now, factor in the fact that the people of Earth produce 380 million metric tons of plastic per year, 60% of which is less dense than seawater. At least 8 million pieces of plastic of what’s produced, which is considered a safe estimate, enter the oceans every year.

The result? Irresponsibly discarded plastic floats along the major currents and is sucked into one of five gigantic vortices around the world. On top of that, the buoyant plastic is degraded into smaller pieces (microplastics) through sun damage, temperature variations, waves, and marine life.

Some damaged plastic, meanwhile, will lose its buoyancy and sink. Thus, visible garbage patches are just the tip of the iceberg—they’re more like a three-dimensional column of junk traveling miles below sea-level. In fact, plastics, as a whole, make up 80% of all marine debris from surface to deep-sea sediment.

That explains the debate over the true size of these plastic-ridden gyres. However, there is no argument over which of the garbage patches is the most formidable problem.

The Great Pacific Garbage Patch is the Biggest Problem

The garbage patch circulating closest to the shores of the United States is a perfect storm. The Great Pacific Garbage Patch (GPGP for short) actually consists of two major accumulations, a “gyre within a gyre.” The Western Garbage Patch churns off the coast of Japan and the Eastern Garbage Patch accumulates 1,000 miles off the coast of California. In between, a “free trade zone” of sorts exists, carrying outlying plastic waste between the two. Altogether, it’s a massive distribution of trash.

An excerpt from Charles Moore’s groundbreaking essay detailing his discovery paints a dubious picture should the GPGP expand:

“As I gazed from the deck at the surface of what ought to have been a pristine ocean, I was confronted, as far as the eye could see, with the sight of plastic. It seemed unbelievable, but I never found a clear spot. In the week it took to cross the subtropical high, no matter what time of day I looked, plastic debris was floating everywhere: bottles, bottle caps, wrappers, fragments.”

However, contrary to Charles Moore’s account, the GPGP is not an Alaska-sized island of trash you can see from space. The National Oceanic and Atmospheric Association (NOAA) is quick to point out that while the concentration is immense and the amount of litter relatively high compared anywhere else in the world, the plastics don’t behave like a singular pool raft. The Pacific Ocean is vast and deep, making it more like a “peppery soup.” And yet, all that pepper makes the issue almost unpalatable.

The bulk of the accumulation (46%) comes from “ghost fishing gear,” like abandoned plastic fishing nets, which are easily spotted. However, unmentioned and often unseen are the plastic bags, synthetic textiles, microplastics in things like the micro-scrubbers found in face wash, and the chemicals that leach from the plastic into the water.

Although in the minority by weight, there’s a reason to sweat the small stuff: Fish and sea creatures ingest microplastics, which we then eat. Telling, a 2018 UK study revealed that 100% of coastal mussels and those bought in supermarkets contained microplastics.

Research is ongoing as to how harmful microplastics are to the human body. But the grim reporting on their effect on sea life isn’t encouraging.

While some will still subscribe to an out-of-sight, out-of-mind mentality, the scale of the problem will inevitably reach U.S. shores. If nothing is done, research suggests that the levels of plastic flowing into the ocean will triple by 2040, leading to an Ellen MacArthur Foundation report suggesting there could be more plastic by weight swimming around than fish by 2050.

And through all of it, the GPGP will continue to “increase exponentially.”

What Can We Do to Reduce Ocean Plastic?

A logical next question is what’s being done about the Great Pacific Garbage Patch, and for that matter, the four other major plastic gyres. The answer is, sadly, not much. The gyres spin in international waters, and no country wants to take responsibility or spend what would likely be trillions of dollars to make even a dent.

While some initiatives exist, like the trash gobbling innovations devised by The Ocean Cleanup and the multinational beach cleanups from 4ocean, NOAA states that eliminating these garbage patches completely may be impossible.

But even as countries shirk responsibility and anti-garbage patch technology is in its infancy, we’re not helpless in stemming the rising storm. On an individual and business level, you can tap into a universal ethos for protecting our oceans from plastic. And we can simplify advocacy into three easy actions.

Numbered #1-7, understanding what plastics are accepted by your local hauler or where you might responsibly dispose of them is paramount.

Break your reliance on the single-use variety

Recycle more of it

For as easy as the waste industry hoped single-stream recycling would be, navigating it solo can be incredibly complicated. With a partner like RoadRunner, we put our experience and technology to work so that businesses can easily keep more plastics out of garbage patches on land and sea.