Trash Talk: Why would I switch from single stream?

The relative ease and simplicity of single stream recycling - also known as 'fully commingled' - make it an alluring option for counties and businesses looking to boost their landfill diversion rates. Since its development in California in the early 1990s, single stream has been heralded as the next big movement in recycling, as its ease and convenience removes any barrier to adoption. The programs make recycling a no-brainer, as the consumer need not spend time thinking about where to toss his used material... just toss any paper, glass or metal container, carton, box or pouch into the same bin. Which explains how by 2005, about a fifth of all U.S. districts with recycling programs had adopted it; and by 2010, adoption was closer to two-thirds.

Despite boosting household collection rates across the country and creating a new height of popularity for recycling, these programs suddenly began ushering in a new set of issues - namely, that of material contamination. These same materials that are so valuable on their own - clean, white office paper; corrugated cardboard; glass bottles; aluminum cans; etc. - are actually full of residue and hazard that reduce their value, and in some cases, make them impossible to reclaim.

Let's pause here for one second to note that - any recycling is infinitely preferable to no recovery at all. Whatever method your office or county uses is intended to recover the greatest volume of reusable materials as possible. The great promise of single stream makes a lot of sense when working to boost nationwide recycling rates and limit public perception of recycling as a burden.

However, despite such simplicity on the consumer end, in order to be reclaimed and reused, the materials must eventually be sorted. At the material recovery facility (or "MRF"), workers and machines alike pick out and separate the paper from the glass and metal and plastic containers and cans. Despite high separation accuracy, once clean paper has been bagged with empty food containers, it tends to not be that clean anymore. If the paper fibers are saturated with, say, pizza residue, they cannot be salvaged and made anew into paper; instead, they become "residuals" - materials that were intended to be recycled, but which wind up landfill. If it's not food contamination, it's glass. Glass shards are particularly hazardous as its virtually impossible to keep the sharp pieces from gumming up the facility machines or from contaminating other materials, such as bales of paper. 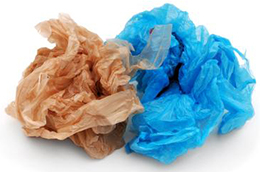 Plastic bags gum up the machinery at MRFs, making them the most common source of frustration for facility workers everywhere. The thin bags are recyclable, but typically only at certain locations where they are picked up specially – most supermarkets provide collection points for these troublesome materials. 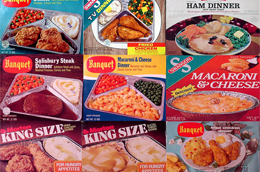 Frozen foods and other packaged goods are often sealed for freshness within packaging composed of multiple layers of paper and plastic, making them a special challenge for recyclers. Depending on machinery, some facilities accept them for recovery; always check with your local provider to avoid contaminating loads.

While technically a form of plastic, polystyrene foam packing peanuts and food containers are not easily reclaimed. Most facilities are unable to process the material, because unlike other plastics it is bulky and often contaminated. Its brittle form means it easily breaks into tiny pieces and disperses, an additional complexity for recyclers. Avoid using this material whenever possible in favor of more readily recoverable plastics.