Everything You Need To Know About Global Recycling Day 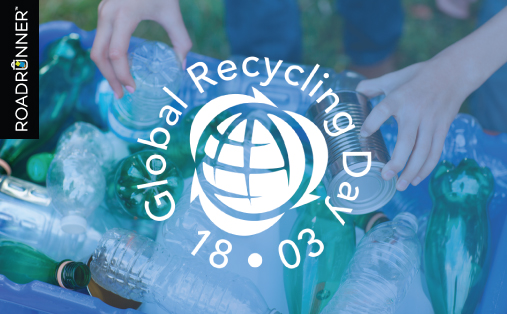 Every year, the people of Planet Earth produce 2.1B metric tons of solid waste. 16% of that is recycled, saving 700M metric tons of CO2 emissions from entering the atmosphere.

Unfortunately, 46% of that trash, enough to completely fill 368,000 Olympic-sized swimming pools, is disposed of unsustainably—meaning landfilled, incinerated, and littered or illegally dumped in the environment.

It’s clear a 16% recycling rate is not enough. We need education, legislation, and action to combat this growing environmental and humanitarian crisis. And Global Recycling Day, celebrated annually on March 18th, is a launchpad for businesses and individuals looking to make an impact.

A Time for Action

Now in its fourth year, Global Recycling Day is a day dedicated to recognizing and celebrating the importance that recycling plays in preserving our natural resources and securing the future of our planet.

In looking at the problem, you might frame this as an issue of supply. In just the last 50 years, humans consumed more resources than we had in all previous history. At that rate, we’re going to run out of the resources that only the earth can provide sooner than we think.

While there is some debate as to which make up the top six, most count water, air, oil, natural gas, coal, and minerals among the most important (and exploitable) natural resources. A step further, the Global Recycling Foundation names recyclables as “the Seventh Resource,” as recyclables supply 40% of the world’s raw material needs.

[More from RoadRunner’s Waste Watchers blog: What is a Circular Economy?]

Still, our work has just begun.

We have an overabundance of an unmentioned, man-made resource: plastic. Each year, the world produces more than 380M metric tons of virgin plastic, and a devastating 91% of it is never recycled. Worse, between 4.8M and 12.7M tons of plastic enter the oceans each year. And, yes, it’s in the freshwater too—93% of Americans have BPA (used to make polycarbonate plastics) in their bodies, and we’re estimated to ingest a credit card’s worth of microplastics every week.

Deforestation is a huge concern as well; our world’s forests are logged for paper, pulp to create cardboard packaging, and building materials. Or, they’re scorched in the name of land development. With the world overreaching in the name of economics, an estimated two-thirds of the world’s tropical rainforests have been destroyed or degraded to date.

The exploitation of resources has sparked global concern. Since becoming a UN-recognized day in 2018, millions of individuals and hundreds of thousands of businesses have raised their voices in awareness of Global Recycling Day.

But 2021 is a time for action, not just awareness, and action needs innovators and leaders.

The theme of Global Recycling Day 2021 is Recycling Heroes, recognizing outstanding individual contributions in recycling and environmental progress, even during unprecedented times.

Let’s take a look at a few individuals who are sparking change and driving recycling and environmentalism forward. And if you’re looking for a way to get involved, don’t hesitate to share this inspirational leadership with your colleagues to mark the day.

18-year-old Greta Thunberg is Swedish climate activist who, more than anything, has proven that even a single person, standing alone, can have a big voice. In 2018, Greta started a school strike outside of the Swedish Parliament called the #FridaysForFuture movement (aka “School Strike for Climate”), encouraging students to skip school to demand action on climate change from their governments.

Since then, Greta has traveled the world and become a figurehead for climate-concerned younger generations. Greta was nominated for the Nobel Peace Prize in March 2019, addressed the United Nations through speeches and panel discussions, and became the youngest person to be named Time Magazine's Person of the Year.

Nearly 40% of the US food supply is wasted per year, and for America’s biggest city, that’s a huge problem to handle. Domingo Morales, a Brooklyn resident, saw an opportunity to do his part by keeping food waste out of the landfill. After applying for a sustainability training program through New York City Housing Authority, Domingo began advocating for composting as an avenue for community-building and neighborhood empowerment.

After leading America’s largest human-powered compost site as Master Composter, Domingo was awarded the David Prize, a grant enabling him to further educate, operate, and “make it cool to compost” through his organization, Compost Power.

With 8M pieces of plastic finding their way into our oceans each day, serious innovation is needed to fish it all out. 26-year-old Dutch inventor/entrepreneur Boyan Slat has the mind to do so. At just 18, Boyan invented a mechanism that harnesses natural oceanic forces to passively collect floating plastic junk. Soon after, he founded the company The Ocean Cleanup with his invention at the center.

In 2018, he put it to the test, deploying it against The Great Pacific Garbage Patch, a massive flotilla of plastic waste that’s now three times the size of France (and growing). After some trial and error, The Ocean Cleanup registered its first successful mission in 2019. Boyan’s next target? Rivers.

Each of these influential Recycling Heroes represents a step forward in the collective consciousness of recycling, and as an end-to-end sustainable waste management company ourselves, we witness those pushing the envelope and taking action each day.

This Global Recycling Day, we’re recognizing the hard-working and dedicated network of drivers of our FleetHaul service, who we call FleetHaulers.

Through custom algorithms and machine learning, we plan our FleetHaulers’ pickups (from businesses) and routes (to recycling facilities) with precision detail, allowing the businesses we serve to keep 99.9% of their recyclable materials out of landfills.

As an inseparable part of our business, our small army of FleetHaulers are making an impact all across the U.S.

Even at the height of the COVID-19 pandemic, RoadRunner’s FleetHaul platform continued to operate as an essential service. While many businesses experienced service disruptions, our FleetHaulers remained a critical support line to the local communities they serve.

For that, we express our gratitude and immeasurable pride for the impact our haulers had in 2020.

It was a big year. But as we said before, our work has just begun. And if Global Recycling Day acts as the launchpad, RoadRunner’s FleetHaul service looks to be the flywheel for our partners, literally and figuratively driving a sustainable future.

Think tomorrow, start today—find out more about aligning your business with RoadRunner Recycling and FleetHaul to start taking action!