The Plastic Bag Conundrum: A Brief History and Where We Are Now 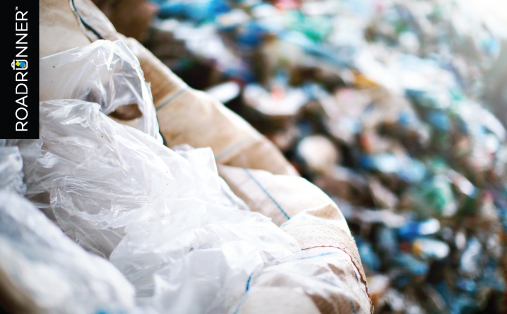 At RoadRunner, we love any excuse to support a good cause and partake in the sustainability movement. July was no exception, and we were thrilled to garner company-wide participation in the global Plastic Free July challenge last month (read the recap here). However,  now that July is over, and we have spent some time reflecting on our habits and areas where plastic reduction is possible, we wanted to deep dive into one of the most challenging plastics to manage: plastic bags.

Experts have described single-use plastic bags as the world’s number one consumer item. However, many people overlook their pervasiveness and, often, ignore the colossal impact of using and disposing of these items in such large quantities. Due to the convenience of plastic, and the way these bags are designed, consumers typically dispose of plastic  bags after a single use. And because so few are recycled, they enter the environment and the ocean where they can take hundreds, or even thousands of years, to decompose. Shockingly, one estimate suggests that 200,000 bags are dumped in landfill every hour.

With such a widespread crisis facing our planet, organizations and individuals must transform the way plastics are produced, consumed, and discarded throughout the world in order to make a lasting impact. To provide you with some guidance on how to achieve this, dive into the post below to learn more about the history of the plastic bag, measures that are being taken to help eliminate this type of waste, how COVID-19 has impacted plastic bag usage, and tips for saving plastic bags. 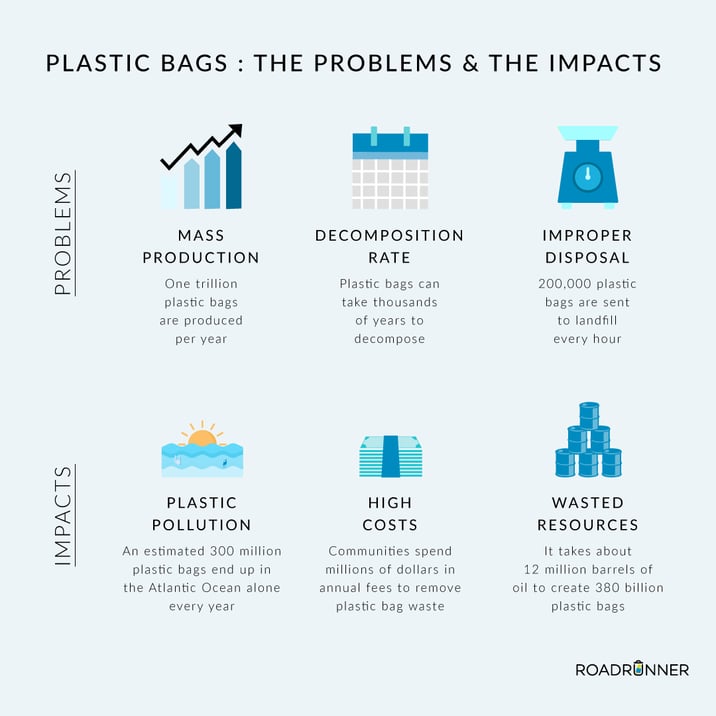 The History of the Plastic Bag: Then and Now

Before the plastic bag, paper bags were the standard for carrying groceries, a material less likely to be a source of litter and more likely to be reused. But, this changed when the plastic bag was introduced to American consumers in 1979 and grew to become the preferred  type of bag due to its waterproof and durable qualities, according to the Nations Environmental Programme.

Fast forward forty years, and that preference has grown into a problem with over one trillion plastic bags currently being produced, per year, around the globe. In the United States alone, consumers use an estimated 380 billion plastic bags and wraps every year, requiring 12 million barrels of oil to create. Unfortunately, according to EPA research, the overall recycling rate for plastic bags, sacks, and wraps was only 9.4 percent in 2017. Although they are technically recyclable, plastic grocery bags are particularly troublesome for recycling centers due to their thin and flexible qualities, which make them prone to jamming or breaking machinery at traditional recycling facilities. As a result, a lot of time and resources are wasted due to broken systems and manually removing these bags from  machinery. For this reason, plastic grocery bags are rarely accepted through typical curbside recycling programs and convenient outlets for plastic bag recycling (like grocery stores) are dwindling.

You may be wondering what exactly happens to all of the plastic bags because so few are  recycled? Given that plastic doesn't decompose, an estimated 79 percent of this material accumulates in our natural environments and landfills. In the northern Pacific Ocean, a patch of garbage twice the size of Texas, known as the Great Pacific Garbage Patch, is floating around and continuing to get larger. The garbage patch is a mixture of plastics, including shopping bags, but also invisible plastic particles known as microplastics. Scientists have found these tiny particles everywhere, from the arctic snow, to the bottom of the ocean floor, to the inside of human bodies.

We know very little about the long-term impacts of microplastics, but research suggests that the chemicals in plastic products that enter our food and water may increase the risk of birth defects, metabolic disease, and other unforeseen health problems in humans and animals. Not only does plastic waste in our oceans create issues for the environment, marine life, and human life, but it also costs some communities $1 million in annual fees to remove waste mostly made up of grocery bags.

Throughout the world, many countries have increased efforts to reduce plastic bag usage, and even eliminate plastic bags altogether. In fact, in the United States, many cities and states have recently put plastic bag bans into place. In August 2014, California became the first state to enact legislation imposing a statewide ban on single-use plastics at retail stores. Hawaii became the second state to ban bags in 2015, followed by New York in 2019, which was due to go into effect in March 2020. Altogether, eight states (California, Connecticut, Delaware, Hawaii, Main, New York, Oregon, and Vermont) have banned single-use plastic bags at retail stores completely.

In 2005, Californians Against Waste estimated that 30 billion plastic bags were used in the state. In 2014, that number dropped to roughly 13 billion bags after ordinances were enacted in 130 cities and counties, including San Francisco. Since the statewide law was passed in 2016, total consumption dropped to around 1 billion to 2 billion bags, the group says.

In response to the plastic bag problem, there has been a rise in environmentally-friendly alternatives, the most convenient and accessible product being the reusable shopping bag. The EPA’s Ten Ways to Unpackage Your Life suggests that every reusable bag can eliminate hundreds (if not thousands) of single-use plastic bags per person. Luckily, many companies have caught on to this trend including Costco and Sam’s Club, two wholesalers that offer customers reusable boxes that were used to ship merchandise to the store instead of plastic bags as well as Aldi’s and Trader Joe’s, which sell their own, and encourage the use of, reusable bags. Moreover, Whole Foods Market’s Green Mission states that the store has avoided single-use plastic bags at checkout since 2008. The store also rewards customers up to 10 cents off per reusable bag they bring with them.

Even regional grocery stores, such as Giant Eagle, are following suit, with the Western PA/Pittsburgh-based chain rewarding customers with “one perk per reusable bag used” promotion for a limited time. Giant Eagle also encourages the use of reusable bags by offering high quality bags available for purchase at just 99 cents each. Check out your local grocer to see what alternatives exist!

The COVID-19 Pandemic’s Impact on our Plastic Bag Consumption

While plastic bag manufacturing and pollution has been a persistent issue for years, the recent global pandemic has brought this topic back to the forefront. To slow the spread of the novel coronavirus, many localities are taking extreme precautions in an effort to flatten the curve and as part of doing so, some businesses have taken safety measures to temporarily pause the ban of single-use plastic bags—even going as far to discourage reusable grocery bags. The Surfrider Foundation states, “While we recognize that some legislators may decide to temporarily pause or delay implementation of bag laws during the global pandemic, if these modifications become permanent they could reverse progress in the fight against single-use plastics and may have long-term ramifications in creating a more sustainable society.”

Target customers, for example, can no longer bring their bags in the store, and many bag recycling kiosks have paused until further notice. Furthermore, the pandemic has caused many cities and states to pause or reverse their plastic bans as well. For instance, New York state continues to delay its plastic bag ban, which was due to take effect on May 15, 2020.

According to some more recent research, there is no evidence that banning single-use plastics is the right answer at this time. John Hocevar, director of Greenpeace states, “The plastic industry has really treated the COVID-19 emergency as an opportunity and is preying on people’s fear to scare them into believing that single-use plastic is the best way to stay safe,” Hocevar says. “And so far, there isn’t any independent scientific research that supports that.”

Recommendations for consumers and retailers

Although we are currently living through a global pandemic, it’s important to still remain focused on reducing our environmental impact, especially when it comes to plastic usage. However, we encourage you to continue following the recommendations of OSHA and the CDC when it comes to proper protocols and educate yourself frequently with the new information that becomes available regarding this topic and others related to health and safety. Generally speaking, however, many environmental officials remain firm in advising consumers to reduce the number of bags they use by limiting the number of bags thrown away after one use, reusing plastic bags where possible, and recycling said bags when they become unusable. This way, less litter ends up in our landfills and fewer toxins are released into the environment overall.

On the other hand, consumers aren’t the only party responsible for responsible plastic usage, retailers must also  offer solutions to consumers so they can make appropriate, “greener” choices. Most of the time, consumers want to act sustainably, but do not have the necessary tools or knowledge to know how to begin. In fact, a recent study found that 88 percent of consumers want companies to help them improve their environmental and social footprints. And, companies who prioritize sustainability as part of their business practices often see improvements in their bottom lines, as it helps create a more sustainable working environment, improves brand loyalty, and, even, drives sales. Another study conducted by IMB and the National Retail Foundation found that 75 percent of people are likely to start shopping at a company that supports an issue they agree with—making sustainability an easier line item to prioritize and integrate into business practices.

All that said, retailers have an excellent opportunity to motivate consumers to make sustainable decisions by focusing on eliminating plastic bag waste, knowing that prioritizing this issue can also have a positive impact on your business in more ways than one. Stores can benefit in choosing a sustainable route by selling reusable bags to consumers and rewarding customers with discounts when they bring their own bags to shop. Target, a large American retailer, proves out this point, saying that, “Guests love this deal—in 2018 alone, our guests used more than 70 million reusable bags, allowing us to return more than $3.5 million to them a nickel at a time.” Additionally, many other well-known retailers, such as Kroger, Walmart, and Kohls, make recycling plastic bags simpler by offering recycling kiosks in their stores (in pre, and hopefully post, pandemic times). All in all, retail stores' commitments to reducing plastic bags can not only help consumers and businesses themselves, but also make an impact on the planet and our overall health, one plastic bag at a time.

Although plastic bags use has been ingrained into our everyday lives, it’s our responsibility, at both the individual consumer and retail level, to ensure changes are made to protect our environment and our health. We’d love to hear how you go about reducing your single-use plastic bag waste. At the corporate level, if you are interested in learning how RoadRunner can help businesses responsibly recycle and find alternative solutions for plastic bag waste, check out our plastic recycling services here and reach out using our form. We look forward to hearing from you!