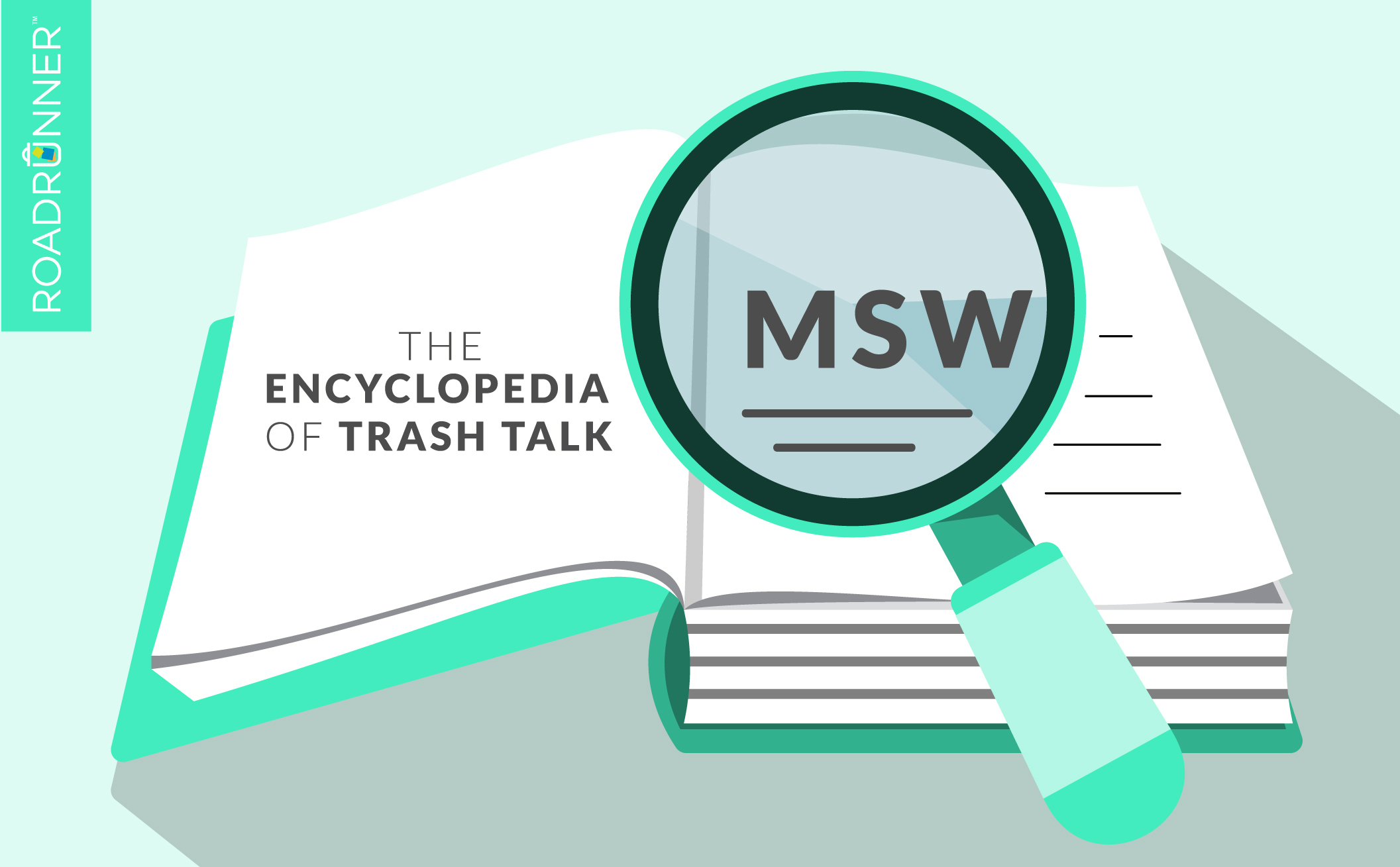 Few industries love slang, acronyms, and abbreviations as much as the waste & recycling industry. Unfortunately, waste haulers and service partners don’t always pass along the Rosetta Stone to decipher the meaning.

From MRFs and APIs to “wishcycling” and “single-stream”, the language used in contracts, invoices, and everyday communication can be downright overwhelming (and sometimes lead to mismatched expectations for your business and its hauler).

Fortunately, RoadRunner is in the know and has compiled a glossary of the most foreign and unfamiliar terms for those outside of waste management.

RECYCLING AND WASTE TERMINOLOGY: THE BASICS

Annual Price Increases (APIs): These are found on the bill from your hauler, often unannounced. APIs are levied by haulers to recoup rising operational costs and can be raised an average of 15% year over year.

Baler: These are machines that compress recyclable materials and waste into small bales that are beneficial for easier storage or transport. Balers are often purchased or rented by businesses that produce a lot of cardboard, aluminum, or like plastics.

Circular Economy: As opposed to the take-make-waste model of business and manufacturing, a circular economy is a systemic approach to economic development that addresses collective issues of climate change, waste, pollution, and more. For an in-depth understanding, check out our post on the topic.

Clean Air Act (CAA): This groundbreaking act required all manufacturers cease CFC production as of December 31, 1995. It was designed to limit ozone depletion by restricting the use of damaging refrigerants but has expanded to include guidelines for landfills and waste incinerators.

Dry Run: Also known as a trip fee, this situation occurs when haulers are unable to collect from your property for a number of reasons, including empty receptacles or inaccessible dumpsters. A dry run is a common monetary penalty displayed on your business’s waste invoice.

Intermediate Processing Facility (IPF): These facilities process recycled material before its shipped to an end product manufacturer. The IPF follows the MRF (see below) in the logistics chain.

Low-Density Polyethylene (LDPE): LDPE, otherwise known as the plastic stamped with the #4 “chasing arrows” symbol, is used for thin, flexible plastic applications like cling wrap, grocery bags, and squeeze bottles. It’s more difficult to recycle than HDPE and may not be accepted by your local hauler.

Materials Recovery Facility (MRF): Pronounced like “Murph," these large facilities receive, separate, and prepare recyclables for the IPF or end product manufacturer through use of conveyor belts, air jets, sifters, and more. For more on MRFs, read deep dive.

Clean MRF: These facilities process single-stream recycling that has already been separated from municipal solid waste.

Municipal Solid Waste (MSW): In short, garbage. All garbage, refuse, and other material in any form or state — so long as it's not hazardous or recyclable.

Old Corrugated Cardboard (OCC): This is post-use cardboard boxes and containers. Corrugated refers to the three-layer construction, with a wavy layer between two flat linerboards.

Polyethylene Terephthalate (PET): PET, otherwise known as the plastic stamped with the #1 “chasing arrows” symbol, is often used to create packaging for soda and water bottles. It may also be shortened as PETE.

Polypropylene (PP): PP, otherwise known as the plastic stamped with the #5 “chasing arrows” symbol, is tougher plastic, used for things like Tupperware, stadium cups, and pill bottles. It’s not widely accepted in curbside and commercial recycling, but the infrastructure required to do so is making progress.

Pay-As-You-Throw (PAYT): An experimental trash collection usage-pricing model where users are charged a variable rate based on how much waste they produce (by the bag or by weight). PAYT is hypothesized to help spike landfill diversion rates, as users are incentivized to separate materials and recycle more.

Roll-off Open Top (ROOT): These are dumpsters—big ones. They’re delivered via truck and “roll off” the truck’s flatbed. Businesses often rent these in the short term to dispose of large or bulky items.

Single Stream (SS): These recycling programs collect all paper, metal and plastic containers, packages, boxes, and sheets together in the same bin. Also known as "fully commingled" or "single-sort," this system first became popular in California communities in the early 1990s, and has since spread across the country. These mixed streams are separated for reclamation at MRFs; although during collection and transfer, contamination is unavoidable. It’s estimated that 25% of collected materials are contaminated, labeled as "residual", and ultimately sent to landfill.

Single Stream Processing Facility (SSPF): Like the SS equivalent of the MRF. Here, mixed materials are separated into their respective commodities streams and either a) baled for shipment or b) sent to landfill as "residual."

Wishcycling: This is the process of adding an item to your recycling bin without knowing if it’s actually recyclable. Common items include pizza boxes, foam containers, plastic bags, coffee pods, soiled paper, and containers with food or drink residue.

Do you have any other head-scratchers on your waste bill or contract? RoadRunner practically wrote the book on making waste and recycling easier to understand, and we’d be happy to connect!