A Brief History of Garbage and the Future of Waste Generation 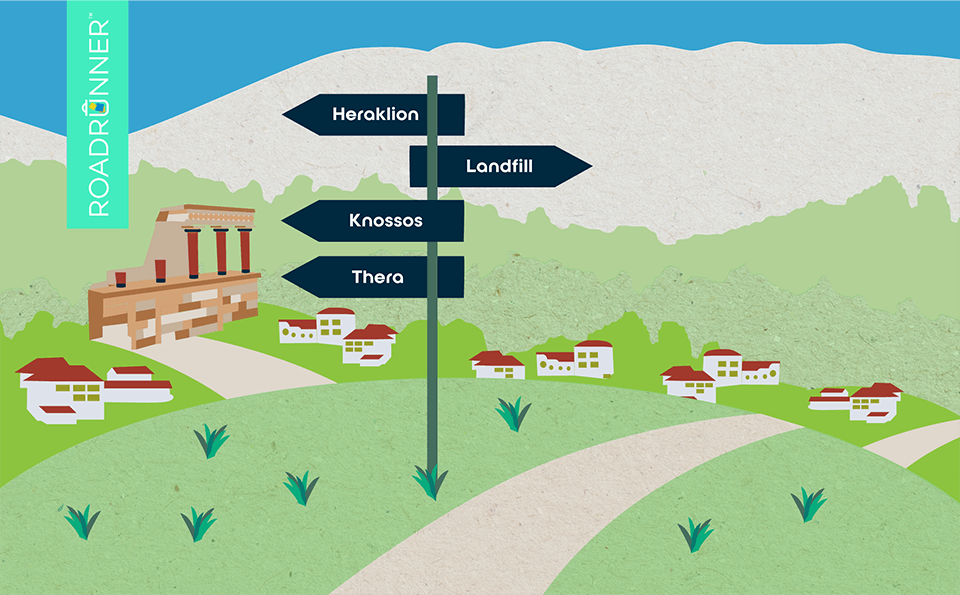 This article was originally posted in March 2016 and has since been updated by Ryan Deer.

For as long as humans have lived and gathered, their consumption has led to waste. It was only after these concentrations became larger that our ancestors realized an inconvenient truth: trash is going to be a problem.

Today, as the world still attempts to find proper and responsible solutions for our rising garbage dilemmas, it’s important to look back at waste management’s origins while we plot the innovations of tomorrow.

The History of Waste and Landfills

The grand narrative of the landfill predates much of modern history. The very first was developed in 3,000 B.C. in Knossos, Crete, when people dug deep holes to hide refuse, which they would then cover with dirt. Near 500 B.C., the Greek city of Athens devised one of the first-known regulations regarding trash—residents were forbidden from throwing waste in the street. Instead, the law stated garbage must be transported and dumped one mile from the city to maintain its aesthetic and prevent disease.

Waste management and sanitation were not widely prized for hundreds of years, perpetuating certain standards of living and, in many cases, helping to create notorious historical moments, such as the dreaded bubonic plague. In fact, waste-related plague concerns still exist in modern-day Los Angeles and other cities, where trash collection inefficiencies have reached critical mass.

Early metropolises were the first to address the problems on a wide scale, mostly because the problems had become so dire. In the 15th century, Paris attempted to buck its filthy reputation by instituting mandatory street cleaning and employing thousands of waste collectors to transport the garbage directly outside the city. However, the city was said to struggle to maintain its defense from attackers as garbage piles rose to monstrous heights directly outside of city walls.

In many other European cities, it was common for residents to dispose of rotting food and other trash by tossing it out the window, attracting packs of wild dogs, feral creatures, and disease-spreading pests.

From the early days, garbage has been a regularly accepted byproduct of life—one that is tossed and buried, out of sight and out of mind. Yet, it wasn’t a smooth process to where we are today.

The Age of Sanitation

In 1842, the "Age of Sanitation" began when a report was released in the United Kingdom linking disease to grimy environmental conditions. While sewage and water supply improvements were central to this movement, addressing refuse and garage fell under this broad umbrella—albeit, to a much lesser extent.

Most of America’s federal funding in the early part of this age was directed toward infrastructure for sewers and water treatment, leaving little in the coffers to establish nationwide waste management processes. Thus, handling and treating waste became a priority on the local level with urban planners and city officials alike. Sanitation departments were born, engineering the collection, transportation, resource collection, and disposal of garbage—often to unregulated dump sites.

Without regulation, most efforts centered around removing the offending disposables and used goods from city sight, resulting in a whole slew of other trials and errors—like floating barges that erupted in flames and or depositing garbage into prominent waterways. For example, New York City dumped all of its trash into the ocean until the mid-1900s.

But in the ’60s and ’70s, landfills were introduced as a solution. These regulated, monitored, and maintained versions of your centuries old “dump” created an outlet that still serves as the primary method of disposal in the United States today.

Unfortunately, the exponential growth of waste generation, both on American soil and around the planet, has revealed that our filling landfills won’t be a solution for much longer.

The Future of Waste Generation

Faced with the reality that U.S. landfills are reaching capacity, particularly in the Northeast, landfill operators aren’t exactly sweating as much as the global community is. Today, just four private waste management companies own over 50% of the waste hauling market while owning 75% of permissible landfill capacity in major metropolitan areas.

As the gatekeepers of our unending waste, private companies can set the price as landfill space grows more scarce. The top two companies, who own and operate 18% of America’s 2,627 landfills, have had stock prices double in the past five years.

Why is that significant? Correlating available waste data to the rising gate fees, from 2015 to 2018, overall domestic waste generation rose 11.6% to a record-breaking 292.4 million tons of municipal solid waste.

A global trend, the World Bank predicts that global waste generation could increase 70% by 2050, reaching 3.4 billion tons, if immediate action isn’t taken. Moreover, using landfills may become much more expensive now that methane emission regulation is atop the domestic and global climate agenda.

As landfills are the third-largest source of human-caused methane emissions, expensive infrastructure and methane capture technology installed by landfill operators will undoubtedly be passed on to the commercial businesses and municipalities that have come to rely on them.

The only move as a society is to reduce solid waste. And changing the conversation around it is RoadRunner’s challenge—we want the world to see “garbage” in a whole new light because we see a wasted opportunity to collect and reuse.

Our path forward isn’t devoid of landfills. Yet, our materials solutions can round off our clients’ operations to become more circular, all while keeping those landfill-driven fees in check.

To start getting smart about waste, reach out to chat with one of our account strategists today.