Landfills: We're Running Out of Space 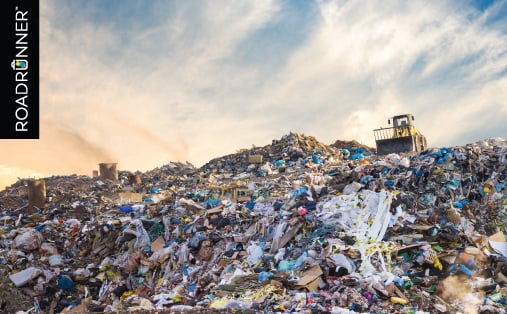 This post was originally posted March 2018 and has updated with recent data and analysis March 2021.

What if we told you the biggest cover-up operation in America had to do with where we send trash? All over the country, subterranean garbage heaps called landfills are rising, fueled by the 292.4 million tons of municipal solid waste (MSW) the US produces each year.

According to the EPA, in 2018, almost half of that trash (49.997%) went to landfills around the country. Worse, yearly MSW production has been steadily climbing, year over year since recording first began in the 1960s—and the US has never had a national recycling rate (recovered material + composting) higher than 35%.

For many Americans, “out of sight, out of mind” is good enough. But inevitably, major problems will surface. From hazardous waste to running out of space, we may be overwhelmed by the rising cost of landfills this century.

What is a Landfill?

Before we get to the Titanic-like collision course on the horizon (or rather, under it), we’ll clarify the concept of a landfill, not to be confused with a “dump.” A dump is largely a relic of the past—unregulated, unchecked excavated land where waste of all sorts was piled with no rhyme or reason.

Landfills, on the other hand, are maintained and regulated by the Environmental Protection Agency. Properly managed, landfills accept MSW and other materials from haulers for a fee, layering it in an excavated hole in the ground, covering with soil, and leaving the waste to decompose. From this process, some naturally occurring methane gas and toxic liquids called leachate (which we’ll come back to) can be extracted.

Unfortunately, many landfills aren’t properly managed, and the process is inefficient. The uncaptured methane, for one, is a major contributor to climate change, 84 times more potent as a greenhouse gas than carbon dioxide. In fact, 2018 numbers reflect that MSW landfills are the third-largest source (15.1 percent) of human-related methane emissions in the U.S.

That’s equivalent to more than the CO2 emissions from 20.6 million passenger vehicles driven for one year or the emissions from powering 11 million homes over the same period.

Aside from greenhouse gases, the landfill-caused environmental crisis runs deeper.

Are Landfills Polluting the Earth?

Waste management has an inelegant history—like how 15th-century Paris was plagued with stinking piles of garbage directly outside its city walls. Our practice of locking our waste far away from people, deep in the earth seems like the most sanitary option available.

However, our waste today is different; our trash heaps can be toxic to humans.

What we throw away matters, and when it fails to get recycled (the case 68% of the time), it often heads to be covered over in the landfill. And 21st-century waste can be disastrous for the environment.

First, we’ll mention the natural stuff: Food and yard trimmings make up roughly 34% of all MSW. Under the right conditions, this would enter into a composting process, where it decomposes to become nutrient-rich organic material, often called “black gold” by farmers and gardeners for its benefits.

In a landfill, however, food, grass clippings, and other organic material are densely packed and thus decompose with the absence of oxygen (anaerobically). For that reason, waste—both organic and inorganic—breaks down significantly slower in landfills than it would in nature.

Through its oxygen-deprived breakdown, organic material emits methane as a byproduct, making landfills volatile and gassy. But the downstream impact may cost even more—and our discarded technology and something called “forever chemicals” are to blame.

While the methane goes up into the atmosphere, the poisonous, wastewater sludge called leachate goes down—and while landfills effectively work like a big sink for liquids, it’s impossible for operators to contain it all.

These toxins can seep into soil and groundwater aquifers and affect local ecosystems, animal-life, and our drinking water. Electronic waste, for example, contains various types of dangerous chemicals, including lead, cadmium, beryllium, mercury, and brominated flame retardants. In 2018, we sent 2.8 million tons of tech to landfills.

Meanwhile, “forever chemicals” (also known as PFAs), are aptly named. These fluorinated, harmful chemicals are used in a wide variety of products like Teflon frying pans, dental floss, and food packaging—and they never break down in the environment, ever.

200 million Americans have PFAs in their supply of tap water, and it’s widely known that they’re found in high concentrations in leachate.

What’s interesting is between food (which releases methane) and chemical-laden electronics and junk (which trickle toxins through leachate), we’re only talking about 35.6% of the total landfill volume. And volume has created a crisis of its own.

Are Landfills Running Out of Space?

Collectively, the world produces two billion metric tons of solid waste per year, says BBC. Americans, for our part, rank number one in per-capita waste, producing 12% of the world’s trash despite only accounting for 4% of its population. From the same analysis, the U.S. was determined to be the only developed nation in the world where MSW generation outpaced recycling.

[More from RoadRunner’s Waste Watcher’s blog: How to Recycle in America]

Framed differently, of the 96,000 Olympic-sized swimming pools Americans fill per year with MSW, we send between 136M and 150M tons of it to landfills annually instead of recycling or reusing it.

So, the elephant in the room: How long until we run out of space to bury it all? When does the New York City Metro Area, home to a population of nearly 19 million people, start to look and smell like 15th-century Paris?

The answer is complex and speculative, but largely, it depends on where you live in the country. According to a 2015 analysis conducted by Dr. Bryan Staley, CEO of the Environmental Research & Education foundation, it’s unbalanced:

“Seven states are looking at running out of landfill space in the next five years, one state will reach capacity in five to 10 years and three states have 11 to 20 years to go. But 22 states have available landfill space for decades to come.”

Nationally, that examination put us at 62 years until all of our currently operating facilities are stuffed to the gills.

Source: Save On Energy

However, this timeline predated China refusing to buy our recyclable waste. That complication becomes a mountainous issue when you consider that the U.S. is the largest global producer of plastic, only recycles 9.8% of the material, and is only exporting a third of what we did in 2015. It has to go somewhere.

When the Northeast taps out, will we shunt unrecoverable plastic junk and other garbage to Middle America? Over the Rockies? Guaranteed, as our waste and recycling must travel more and more miles to the end-destination, you won’t see many haulers clamoring to eat the cost of gas for their two-mile-per-gallon compactor trucks.

How Does Landfilling Cost Your Business?

Even if you’re an invoice eye-balling business, many stakeholders don’t realize the height of costs associated with disposing of waste in a landfill. Miles on the highway are one thing, but believe it or not, it's much more expensive to send waste to landfill or incinerate it than it is to recycle materials. And tipping fees, which are a gate fee for landfills (measured in price per ton of deposited materials), continue to rise as waste production increases.

Tipping fees, mileage, and high contamination all contribute to why traditional waste management services apply APIs (annual price increases) as high as 20% each year, and why your bill climbs inexplicably higher and higher, just like the landfills.

How Can RoadRunner Help?

There’s not a situation in the near future where we won’t be landfilling—but RoadRunner Recycling firmly believes it shouldn’t be the de facto first choice for an overall U.S. waste stream that is 75% recyclable.

Through waste prevention and dedicated recycling, companies can make inroads to slowing the rising environmental, developmental, and commercial costs of landfills.

Sustainable businesses following a 5 Rs framework can help eliminate the need for raw materials, minimizing the release of greenhouse gases and saving energy. Take office buildings for example—recycling one ton of paper can save 17 trees from being cut down, representing a 64% reduction in energy consumption, a 58% reduction in water usage, and a 60-pound reduction of air pollution.

As a dedicated waste and recycling provider, RoadRunner Recycling can help your business begin recycling the four most landfilled items: paper, organic material, plastics, and packaging.

Plus, we’ll save you some money in the process. Companies that partner with RoadRunner realize the effect of landfill diversion through a 20% average contracted cost savings on their bill for a 36-month period, with APIs capped firmly at 3%.

And it’s all possible because of efficiency.

Through tech-driven solutions and a fleet of community-owned trucks, we can boost your recycling rate over 50%, and 99.9% of that recyclable material won’t ever sniff a dirty landfill.