Update: Diving Into The Plastic Crisis 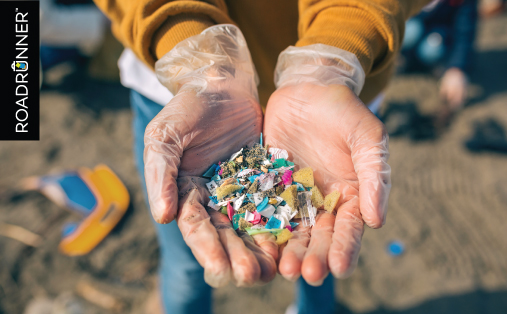 Since the 1950s, 9 billion metric tons of plastic has been produced, and today it's completely ingrained into our everyday lives: from the products and packaging that manufacturers use to the serious dependency consumers have for it. The rate at which we consume plastics has become unmanageable. This crisis has many people asking: what can we do to solve a problem of this scale? In this post, we dive into the complexities of the plastic crisis, the actions being taken to help fight it, and the steps your businesses can take to join the fight.

How Did The Plastic Crisis Begin?

The plastic crisis has quickly become one of the world's greatest environmental challenges. Since production took off in the 1950s, the amount of plastic produced doubles every 15 years. Recycling facilities haven't been able to keep up with the massive amounts of plastic waste and manufacturers have failed to make their processes more sustainable.

For years, the United States sold large amounts of recyclables to China. By 2016, the U.S. was exporting nearly 700,000 tons of plastic each year. That all changed in 2017 when, in an effort to reduce rampant recyclable contamination issues, China introduced the 'National Sword' Policy, which banned imports of plastic recyclables from the rest of the world. The United States lost its largest purchaser of plastic materials, which resulted in stockpiles of plastic recyclables at materials recovery facilities. Without a market for recycling, the majority of plastics end up being sent to landfill, and many municipalities have stopped recycling altogether.

According to National Geographic, nearly every piece of plastic ever created still exists. Given that plastic doesn't decompose, an estimated 79% accumulates in our natural environments and landfills. Currently, 5.25 trillion plastic particles are gathering in the world's oceans. In the northern Pacific Ocean, a patch of garbage twice the size of Texas, known as the Great Pacific Garbage Patch, is floating around and getting bigger. The garbage patch is a mixture of plastic debris such as bottle caps, straws, and container rings, but also invisible plastic particles known as microplastics. Scientists have found these tiny particles everywhere, from the arctic snow, to the bottom of the ocean floor, to rain. We know very little about the long-term impacts of microplastics, but research suggests that the chemicals in plastic products that enter our food and water may raise the risk of birth defects, metabolic disease, and other health problems in humans and animals.

Solutions to The Plastic Crisis

Many organizations and governments around the world are working hard to eliminate plastic pollution. Here is a list of some of the bans, movements, organizations, manufacturers, cities, and nations that are tackling the plastic crisis:

The European Parliament has voted for a complete ban of single-use plastics across the European Union. The ban includes some of the most common ocean-polluting plastics, such as single-use cutlery, straws, and stirrers. The EU expects the ban to go into effect by 2021.

In 2018, congress passed the Save Our Seas 2.0 Act to address plastics and debris entering the oceans. The Act focuses on research, reducing plastic waste, and the tools that are the most effective for solving it.

To help Barbados reach its plastic-free goal by 2020, the island enacted a nationwide ban on single-use plastics as of April 2019. The ban includes plastic cups, plates, cutlery, straws, Styrofoam containers and more.

Seattle is the first large U.S. city to ban plastic straws. The movement, Strawless in Seattle, has already eliminated 2.3 million plastic straws and hopes to raise awareness throughout the country about the problems that come with single-use plastics.

In 2013, Boyan Slat started developing a system to remove plastics debris from the oceans called The Ocean Cleanup. According to The Ocean Cleanup, The 2,000-foot-long U-shaped drifting device is designed to capture plastic debris using the natural forces of the ocean to catch and concentrate the plastics. The collected plastic will be brought back to land for recycling and then sold to B2C companies. The Ocean Cleanup estimates that the device will clean up half the Great Pacific Garbage Patch in just five years.

NextWave is keeping plastics out of the ocean by employing people living in coastal regions to cleanup plastics before they enter the ocean, then turning them into new products. NextWave was created by Dell and The Lonely Whale, but it's grown into coalition of 10 companies including Bureo, GM, Herman Miller, Interface, Trek Bicycle, Humanscale, IKEA, and HP. Each of the companies commits to using the recovered plastics in their supply chains. Just recently, HP announced that they have created the first PC made from recycled ocean-bound plastics.

4ocean sells bracelets made from 100% recycled materials collected by 4ocean employees, as well as apparel and water bottles. For every product sold, the company removes one pound of trash from the ocean to free the seas of plastic pollution. Since 2017, 4ocean has removed nearly 7 million pounds of trash.

Vegware is a manufacturer of plant-based, compostable packaging and catering disposables. Most of the time, plastic food and drink packaging is not recyclable due to contamination. Vegware solves the contamination problem by creating its products from plants, which can be composted along with food waste.

Ikea plans to use mushroom packaging

Ikea plans to replace Styrofoam packaging with biodegradable packaging made from mushrooms. Whereas Styrofoam never decomposes, mushroom packaging can decompose in just a couple of weeks.

Movements Are Encouraging The PUblic To Get Involved

Plastic straws are one of the main plastic polluters in our oceans. The goal of No Straw November is to bring awareness to the problem of plastic straw pollution. The movement challenges people to refuse straws during November, and eventually break the straw habit for good. Learn more and see how you can get involved this November here.

Plastic Free July is a global movement that challenges everyone to reduce single-use plastics throughout July. Last year, 120 million participants across 177 countries took part in the challenge. Plastic Free July is all about making small changes and minimizing your everyday plastic consumption habits.

How Can Businesses Reduce Plastic Waste?

Your business can make small changes that end up making a large impact! Here are six easy ways to reduce plastic waste:

When you do use plastic, it's important to rinse, dry, and recycle the plastic containers in the correct recycling bin.

Get involved and make a difference by volunteering in your community or by simply picking up litter!

We're big fans of reusable products to cut out wasteful plastics. You would be surprised how much waste is reduced when you choose reusable or refillable items.

Work with manufacturers who use biodegradable and compostable packaging. It is a much more sustainable alternative to plastic packaging.

Support the adoption of policies in your communities, and stay up-to-date with which bans are in place in your city or state.

It's amazing how big of an impact your business can make by committing to reduce plastic waste. If you're looking for more ways to make a difference, share this resource with your colleagues who are eager to get involved. Also, let us know in the comment section below how your business reduces plastic waste. A tip is worth a lot in the green-community. Thank you, as always, for reading!