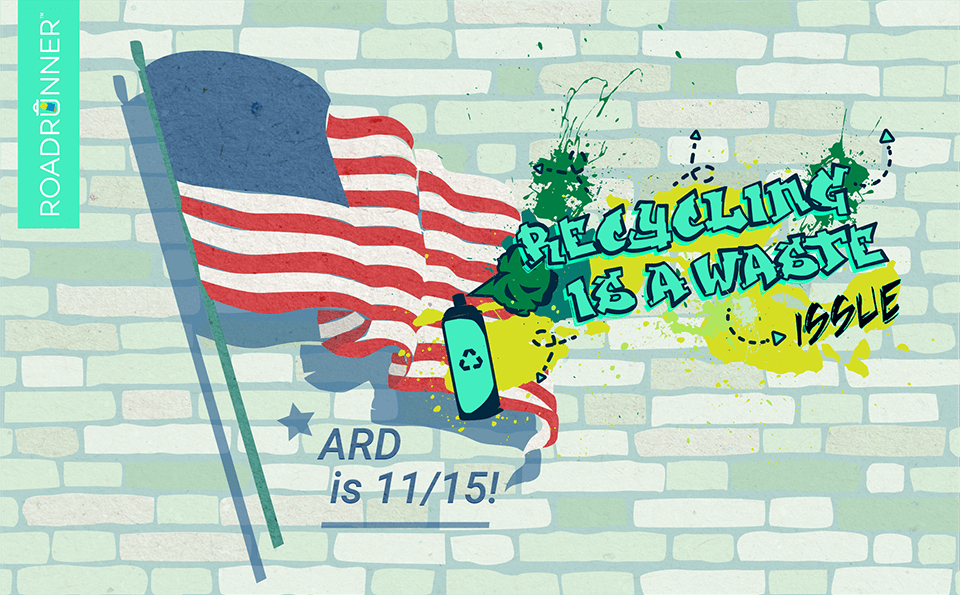 This year alone, you may have seen a handful of headlines raising serious doubts about the practice of recycling.

Is Recycling Worth It Anymore?, asks NPR.

Is Recycling a Waste?, questions CNBC.

But as America Recycles Day takes place as usual this November 15th, RoadRunner has a new message for sustainable businesses:

Conventional recycling may have its flaws, but pledging to harness its power—and learning to do it right—is a crucial component to overall responsible waste management.

What is America Recycles Day About?

On its face, America Recycles Day is an annual national observance recognized by the U.S. Environmental Protection Agency (EPA) promoting the economic and environmental benefits of recycling, as well as encouraging Americans to recycle more and recycle better.

First entering the national stage in 1997 with a joint press conference from the EPA and National Recycling Council, the November 15th observance became official two years later with a proclamation from President Bill Clinton.

Since its inception, and heightened after its reorganization under nonprofit Keep America Beautiful, America Recycles Day has promoted corporate-sponsored collection events for recyclable materials as well as encouraging individual responsibility and education. Equally important, it advocates for the importance of purchasing goods made from recycled materials.

Fortune 500 companies have historically rallied around this day to announce sustainability initiatives and demonstrate commitments to recycling through events and donations. In 2020, however, the EPA used the day to announce a first-ever national recycling goal of achieving a 50% recycling rate by 2030.

Unfortunately, even with 20+ years of education and excitement, there’s much to be done when it comes to making inroads on America’s waste and recycling problem.

Sadly, many Americans operate closer to the 5lb mark on the spectrum, far above the global average. In fact, despite only accounting for 4% of the world’s population, the United States generates 12% of the municipal solid waste (aka trash).

India and China may generate more trash by volume (27% of global annual MSW), but collectively, they have eight times the population of the United States. That means Americans generate over three times as much daily garbage as an ordinary citizen in China or India.

Relatedly, our national recycling rate is far below other developed nations. While Germany manages 67%, the Netherlands’ recycles 57%, and Italy sports 51%, the United States tops out around 32%.

Even more interesting are America’s recycling rates by material, seen below.

It’s no wonder our waste generation is so high whenever easily recyclable materials aren’t recycled. By simple math, 68.3% of glass, 65.1% of aluminum, and 31.8% of cardboard and paper become waste after use, often filling up our nation’s overstuffed landfills.

The situation is suboptimal, but to say recycling isn’t important is incorrect because it doesn’t tell the full story. That’s because recycling is just one strategic tool of the overall waste reduction gameplan.

Alongside circular and closed loop design, upcycling in manufacturing, stream separation strategies, and zero-waste-to-landfill initiatives, smart recycling is an imperative component to a less wasteful country. And that’s the real purpose of America Recycles Day.

Recycling more, recycling better, and buying products crafted with recycled materials makes an enormous difference to the economic environment and natural world. Expanding the view, thinking about recycling through the lens of creating less waste is an important distinction.

These strategies are simple and effective ways your business can start wasting less and recycling more on America Recycles Day and beyond.

Many forget that composting is a form of recycling, but it’s an excellent place to start when it comes to responsible waste management because:

Does your business have a composting plan? If not, allow RoadRunner to strategize a hauling setup for you.

In single-stream recycling, cardboard and paper are collected in the same receptacle as glass, aluminum, and plastic, the most common vessels for food and beverages. Oily food residue and unsecured liquid inevitably splatters on cardboard and paper, irreparably damaging its fibers and its overall recyclability.

Knowing this, traditional haulers often designate entire loads of the material for the landfill.

Consider an alternative: The average American uses and discards 700 pounds of paper per year, but if you recycled all of it by arranging a separate service, each of your employees would save the equivalent of nearly 6 mature trees. So, for some helpful information on breaking down and separating cardboard and paper, you can read our guide here.

It’s a changing world, where economic performance and environmental responsibility are inextricably linked. That’s why 90% of S&P 500 companies publish an annual sustainability report.

Paramount to these reports are efforts of waste reduction, often in the form of zero-waste goals. However, achieving zero waste is impossible without staying informed on how much waste your business is producing.

As a strategic partner, one of RoadRunner's core offerings is the ability to provide reliable materials management metrics—across a wide variety of streams—for businesses in both the public and private sector.

And in the long run of responsible waste management, knowing when, where, and how much is invaluable.