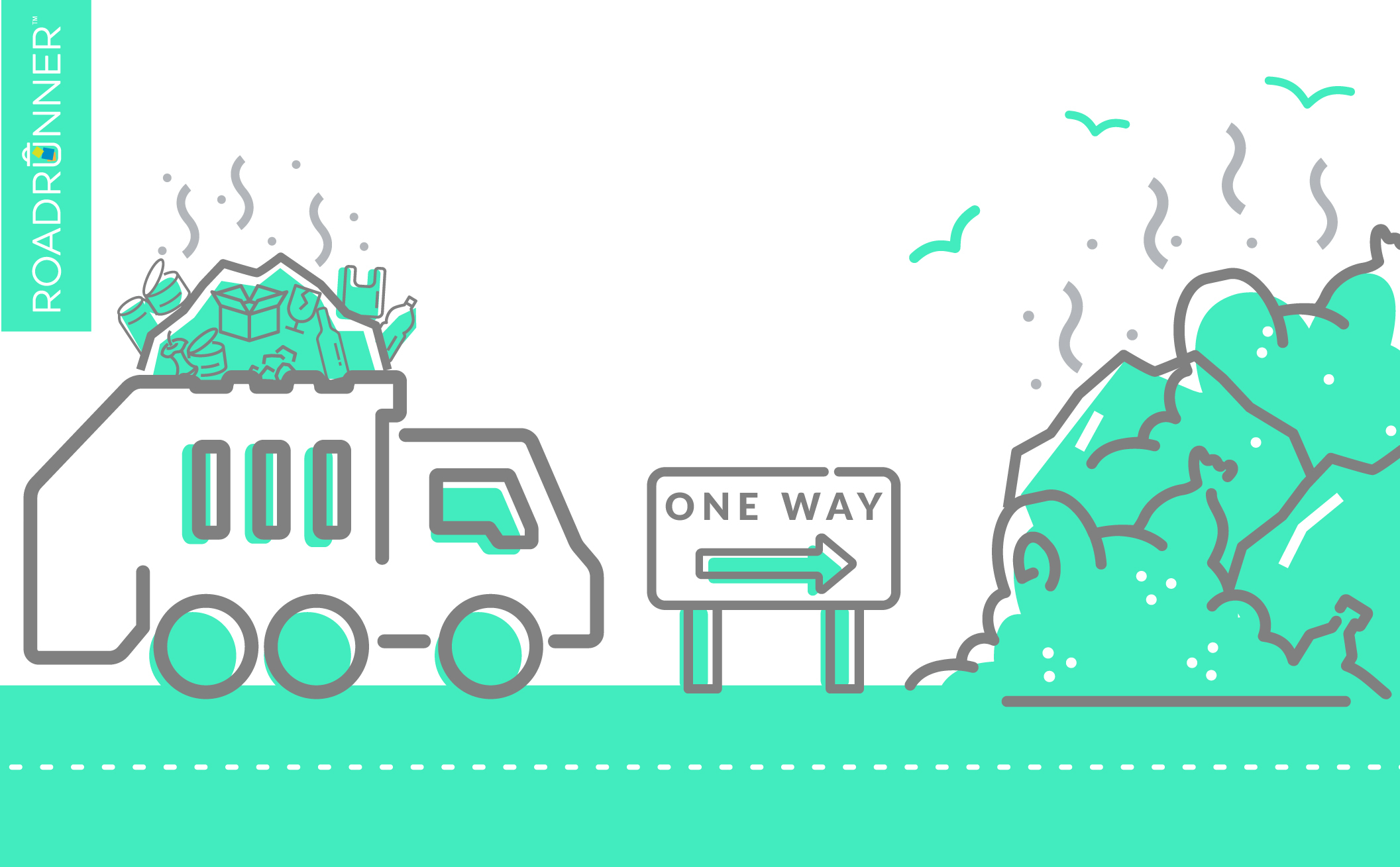 For nearly 30 years, Americans have been honeymooning with a recycling system that seems too good to be true.

The convenience and simplicity of single-stream recycling was an easy sell for consumers and commercial businesses alike—whereas all recycling materials could be collected in the same receptacle (we’ve referred to it as “the magic bin”). However, it was the lucrative commodities market (the buyers of post-consumer material) that made single-stream irresistible for cities, municipalities, and the haulers that serve them.

So, in 2021, why would any city, municipality, or business elect to do anything differently? Because if you can see past single-stream’s golden façade, you’ll discover that the system stopped working years ago.

Now, as U.S. cities grapple with overstuffed warehouses, landfills at capacity, and a mountain of bills where there was once revenue, places like San Francisco, Seattle, and more have added back material streams—and accompanying them, recycling rates that outshine anything achieved by single-stream.

As a growing contingent explores a different future, we delve into how single-stream made its mark, why it failed, and the cities finding success in dual-stream, multi-stream, and clean-stream systems.

Why the Majority of the U.S. Uses Single-stream Recycling

Before single-stream found buy-in, the name of the game was “source separation.” This meant that the consumer or business that wished to recycle had to sort and separate its own materials. The most common method, a dual-stream system, saw aluminum, plastic, and glass go in one container while paper products and cardboard were kept clean and clear in another. Even the collection trucks at the time had multiple compartments to prevent commingling.

The issue was that this system took time which, to many of the parties involved, was directly tied to money. Ultimately, for recycling to become a way of life for consumers and end-users, recycling had to be easy, and it had to save money.

So, in 1989, Phoenix, Arizona adopted a new sort of system that would increase recycling volumes by reducing the effort needed to participate: one can, all the recyclables, dragged curbside every week.

The compactor trucks that collected them would only have one compartment, reducing the collection time by half and slashing operational costs of the vehicle. And by 1993, a large-scale processing factory called a materials recovery facility (or “MRF”) allowed the bulk sale of recyclable materials to become increasingly profitable, effectively validating the system.

Recognized as a convenient and cost-effective system for managing waste, the single-stream era in the United States had officially begun.

While adoption wasn’t overnight, it gradually climbed. And between 2005 and 2014, single-stream recycling programs became the majority, with 80% of U.S. communities adhering to the singular can system.

Unfortunately, few could have predicted how low the ceilings really were, or how one move in global policy could send it all crashing down.

Why has growth stagnated? It turns out one of single-stream’s strengths is also one of its biggest weaknesses: There’s only one can for everything.

While participation remains high—roughly 59% of Americans have access to curbside recycling—education on recycling remains low, with 62% of Americans believing lack of knowledge has led them to recycle incorrectly. More often than not, this leads to “wishcycling,” the act of adding an item to your recycling bin without knowing if it’s actually recyclable or not. Wishcycling is also another name for contamination.

Because of how the system works, the “magic bin” is actually a disgusting, contaminated soup pot. Shaken, stirred, and dumped into a compactor truck with your neighbors’ random mix, contamination keeps 25% of what we put in our recycling bin from ever being processed at a MRF. Broken glass... oil-splattered cardboard... a slew of hard-to-recycle plastics—in the instances where they can be caught, they’re deemed worthless and sent to landfill at the haulers’ expense (helping to explain our growing landfill crisis).

Of the materials that do get processed, however, there’s still trouble. Since 2017, the biggest question mark around the nation’s recyclables (particularly plastic scrap) has been who wants it?

That’s because the world’s largest importer of recyclable waste shut its door. An excerpt from our article These Items Don’t Belong In Your Recycling, China’s abrupt embargo on our dirty recyclables changed the game, possibly forever.

“Under the strict legislation, the country would only allow the import of recyclables if the load contained 0.5% or less contaminants.The United States, who had been sending 40% of its paper, scrap plastics, and other recyclables prior to the policy, averages contamination rates of 25% or higher.”

As Indonesia, Vietnam, Thailand, Cambodia, Malaysia, and India align their own policies akin to China’s “National Sword” policy, many municipalities and cities have witnessed a budget-breaking shift. Before, municipalities would count on a boost in revenue from the sale of its recyclables. With fewer buyers for their commodities, many are choosing termination of their program entirely over paying an exorbitant, single-stream waste management fee.

But that’s not the only option.

Which Cities Are Leaving Single-Stream Behind

From legacies of landfill diversion to entire metroplexes jumping ship, these are the cities that have seen the writing on the wall and are ditching single-stream recycling before it’s too late.

San Francisco is one of very few U.S. cities that diverts more material for reuse than it sends to the landfill, achieving a 50–60% diversion rate per year. The Californian city uses a "Fantastic Three" three-stream citywide residential and commercial curbside collection program—a black bin for trash, blue bin for commingled recyclables, and green bin for compostable materials (including food scraps and soiled paper). On the education front, sanitation workers routinely “audit” streams with every pickup, leaving targeted notes for customers and businesses on how they did.

Seattle also subscribes to a three-stream method using the same color-coded bins and frequently boasts one of the highest recycling rates in America. In 2018, the city reported a rate of 56.5%. Not solely reliant on the good intentions from its residents and businesses, Seattle adheres to a pay-as-you-throw system that hikes prices by how much solid waste you throw in the trash, which greatly reduces waste production. Meanwhile, a mandatory recycling commercial recycling program aims to boost recycling rates for all businesses to 75% by 2022.

Boise, Idaho adds streams to solve its unique waste issues. In 2016, the city discovered that 46% of what was heading to its county landfill was food scraps and other “green matter,” so the city added composting to curbside recycling. Residents of Boise can even pick up the compost for personal use free of charge. Also recognizing that most plastics were considered contaminants, Boise piloted the EnergyBag Program with Hefty that allows residents to place any plastics #4–7 (plastic bags, shrink wrap, milk jugs, etc.) into a designated collection bag. The materials, picked up curbside, are turned into fuel for manufacturing plants instead of being landfilled.

Dallas, Hoboken, and More to Come

One of the biggest changes sweeping the nation is a dual-stream system that preserves the integrity of paper and cardboard products. One week, residents add loose paper, paperboard, and cardboard. The next, commingled plastics, aluminum, and glass are collected. By doing so, materials escape the majority of contamination and often skip processing altogether before finding a buyer—that means a considerable cash savings for the cities and their residents. Dallas, Hoboken, and Wilkes-Barre, PA are notable converts, but the list is growing quickly.

How Can Businesses Add Streams?

So, how do commercial businesses add streams? Even if your city or municipality is firmly locked into a single-stream system, RoadRunner may be able to help your organization realize the cost and eco-friendly benefits of a multi-stream system immediately.

Operating in 15 major cities in the U.S. (and growing), our integrated waste and recycling management company has coined the term “clean-stream” recycling. Leveraging a third-party network of haulers called FleetHaul, RoadRunner efficiently routes and collects a wide range of recyclable materials—and most importantly, drops them off directly at specialized recycling centers.

Want to see how it works? Tune in below, and don’t hesitate to reach out to see if we’re serving a city near you.